BARRR Shares a Secret / Another Article Proclaims the Death of Hipster Culture / Side Project of the Week: Dr. Octor

Perhaps the essence of scenester culture is the feeling you're part of an exclusive club, and perhaps no local event is better at providing that feeling than BARRR's "secret" comedy shows. The second installment of the series is tomorrow night, and BARRR drops by to give you the scoop. Here's his blurb, interspersed with a few parenthetical thoughts from Chip and Richard:


"If you made it to the debut of Shhhhh: Secrets, you know it was a wild event. [refresh your memory with Tweetnastyy's review here ]. I'm booking super intimate private/secret events all year. I don't announce where the show is or what time it is until the day of the show. You gotta be in the know and paying attention. The point of Shhhhh:Secrets is to get a few performers/artists/comedians together to work out new material or simply to try something different. We had a packed house last time. It was incredible. This is not for the conservative crowd either. My stand up is usually pretty brutal & honest. It's more cathartic story telling and crowd interaction. [Chip: "Why can't modern comedy just let me sit quietly in the dark and laugh? I have a feeling BARRR will single me out and make fun of my boners."]. Doing something different leaves open the possibility of things going terribly wrong. That's why we keep it intimate! I don't want to deal with a bunch of jerk offs expecting Dane Cook. [Richard: "The primary difference between this show and a Dane Cook show is that this show has the potential to be funny."] It's also harder to perform with 50 people staring at you 5 ft away. No Stage. You can make direct eye contact with everyone in the room. It's really intimidating, but it's really rewarding to see your act work. It's a rush you can't get anywhere else. Mystery guests are booked & I will deliver an entire new set of material. [Chip: "However, I'll be shouting requests for a bit of the older stuff too, such as BARRR's patented catchphrase 'rape cottage.'"]. So....you're wondering where do I get the info?! Email BARRRHEAVEN ( AT ) GMAIL for the announcement on Friday of where & when the show will be. The Show is always at 8pm. This allows you to come out early, get drunk, laugh, & go out! The show is a fundraiser for the A.D.D. podcast! Only $5 BYOB! Beer will also be available for sale on the cheap!

Keep your ears to the soil...cuz that's where the story is!

BARRR prepping for a comedy show: 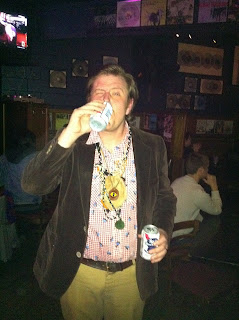 You can't tell it in Larryville, but the media keeps insisting that hipster culture is dead. The most well-known piece on the subject is probably the New York Times "What Was the Hipster?," which we have considered here in the past.

But today our Twitter-buddy @boredintellect tips us off to a new, snarkier, (hipper?), piece called "Let’s No Longer Make Love, Nor Listen To Death From Above: The Hipster’s Eulogy." In this piece, Kyle Fitzpatrick examines three recent events: the last shows of LCD Soundsystem, the decline of American Apparel, and (of course) Carles closing down Hipster Runoff:

"The most vocal and ironic of all ironers in the past decade, the site was a shining beacon of pop culture commentary by, for, and against hipster culture. Hipster Runoff was a conundrum: it was in on the joke, while living the joke, but didn’t ever know the punchline."

Chip: "That's what we aspire to here, except we tend to offer punchlines, usually in the form of boners."

Fitzpatrick concludes that we're entering a "Posthipster" world, but his definition of that world isn't much different than the old scene, it seems:

"Posthipster, a person who has avoided Pabsts being thrusted upon him by partygoers and has instead grabbed up a newly redesigned bottle of Miller High Life."

Those guys in Drakkar Sauna are so prolific. They write books, they serve us PBRs, and they find time for numerous side projects such as The Hips and Dr. Octor, who rocked the Replay last night. Chewyfally assures us that there were an "exquisite number of mustaches in the audience." That's all we needed to know.

Read the I Heart Local Music review of the show
here
Posted by Nog at 4:10 PM

What a wonderful article. Ha. Thanks for the press. Always!