The public often associates Wonder Fair with the mischievous artistic antics of Asteroid Head Art Club, but Wonder Fair's openings of late have been far more serious-minded and impressive than other Final Friday offerings (such as "mustache art" and giant inflatable suits).

This Friday they offer Ray Sohn's Pyramid Lake, "a series of works on paper combining elements of ink drawing, collage and painting." . Sohn is a Brooklyn-based artist (instant hipster cred) whose work has been shown in MOMA. Here's an excerpt from his artist's statement on the Wonder Fair website:

"Similar to a jazz musician, I was attempting to build up an idiomatic language of my own out of the basic building blocks of lines and symbols, with which I could freely improvise. At the earliest stages of the project, this spirit of jazz improvisation is what inspired me to refine and advance the work in terms of technical dazzle."

Chip: "I'd say that art and jazz definitely make for a good comparison, since both are things that I absolutely don't 'get.' Other things I don't 'get' include classical music, shoegaze, mumblecore films, contemporary poetry, and gourmet burgers."

When you visit the gallery on Friday, make sure to also purchase an "Occult Legs" t-shirt, which features one of Sohn's works handprinted by Wonder Fair in conjunction with the show.

Chip: "I won't be able to wear anything 'occult' back home in Southeast Kansas for fear of being burned as a witch. They fear the occult down there like Larryville fears Kris Kobach." 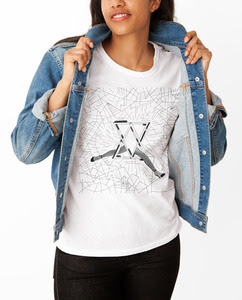 We love every band whose name is spelled in a weird way or using odd punctuation, so you can bet we are huge fans of tUnE-yArDs, whose new album whokill receives a very high 8.8 on Pitchfork:

"...she creates an almost unsettling intimacy on "Wooly Wolly Gong" by mixing the ambient hum of room sound with closely mic'd arpeggiated chords and vocals..."

"'Powa'...builds steadily over the course of five minutes until it reaches a stunning climax in which Brenner's bass bounces gently as Garbus hits a glorious high note like a feral Mariah Carey."

Richard: "First off, my new band name is going to be 'Feral Mariah Carey.' Second of all, if you saw tUnE-yArDs open for Dirty Projectors at the Granada a few years back, when Dirty Projectors were still hip, you no doubt already have this album."

In a rare blast from the past, we now reprint an excerpt from our original Dirty Projectors review, circa Nov. 10, 2009, in which we over-use the word 'hip' even more than we do now but weren't yet hip enough to know how to punctuate tUnE-yArDs:

"The Granada was not full for the Dirty Projectors' first-ever trip to Larryville, but the hipsters in attendance were so very hip that each one of them made up for five normal hipsters at least. And from the moment when opening act Tune Yards' vocalist took the stage by performing a few whale calls, looping them, backing them up with a hip-hop beat, and tuning her ukulele, we knew we were in for something special. It was simply an added bonus that her voice was absolutely amazing, so much so that the Talking Heads-y schtick of the (surprisingly accessible) Dirty Projectors soon paled by comparison (apart from their equally impressive female harmony vocals). Notoriously pompous Projectors' frontman Dave Longstreth, perhaps embarrassed to have left New York to play for a half-full room of Midwestern rubes, barely acknowledged the audience all night except to remark on the eerie "Lynchian" shadows along the empty back of the room. Even so, the remark was enough to win Richard over, since he has seen everything Lynch has done three times at least, and he soon began to believe that he was just as hip as Longstreth. This illusion was shattered, however, at the bar, where Richard friend was given a special "dodgeball discount" on a fine Free State ale while her friend, the newly elected East Side President, was given a special cup larger than anyone else's. And Richard? Richard was charged an exorbitant price for a shitty beer in a tiny cup." 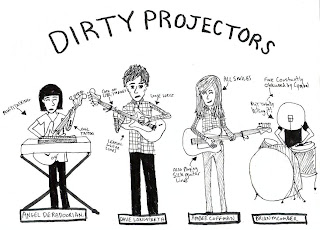