"Everything has to start someplace. Historians will note that the revival of track and field in the United States began Wednesday, April 20, 2011, right here in Lawrence, on Eighth Street, 80 feet or so east of New Hampshire." --Tom Keegan, LJ-World

We suppose only time will tell, Keegan, but in the meantime we can say for certain that last night was a great evening for Larryville gawkers, who showed up 2500 or so strong (if you believe the estimates) despite the fact that the majority of us, from various vantage points, could see little more than an occasional upstretched arm of a contestant or the arc of the shot or the thud of the landing in the massive amounts of sand that had been trucked in for the day. From where we were stationed, just outside Mirth, the Tap Room appeared to be a scenester oasis at the edge of a massive desert. Surreal. Based on reports in yesterday's LJ-World, we were hoping for an absurdist competition to match the carnival atmosphere. One competitor was reputed to celebrate victories while running the perimeters of the competition in a cape and waving a turkey leg (he has also vowed to one day compete while dressed in a full bear suit). We saw nothing of the like (although we missed the guy who ripped his shirt off to inspire the crowd before his throw). But we enjoyed what we saw, even while being saddened that the event could not have been somehow extended to last for its entire scheduled running time instead of ending 45 minutes earlier than predicted, leaving us nothing to do for a long period of time except stand in the street sipping a Sandbar Shark Bite and getting autographs from the world's greatest shot putters.

We like this photo from the LJ-World (click to enlarge). This looks like poetry in motion, doesn't it? The poetry of big burly bearded fellows who would "put" us right through a window if we write anything particularly snarky about them. 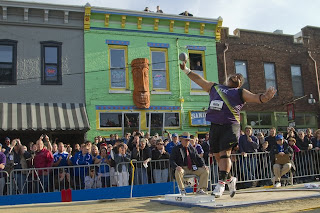 You should also watch this cool time-lapse video of the construction of yesterday's event.

Obviously, PBR is our scenester drink of choice. But we'll occasionally indulge in a Hamm's (at Love Garden) or a Tecate (at Esquina) or a Miller High-Life (at 715). Every so often, though, we get an urge to sample the sophisticated flavors of Free State beer, and when we saw their tweet yesterday regarding a beer called Lupulus Maximus, we knew from the name alone that we must try it, and soon.

Richard: "I have no idea what the name is meant to suggest but, to me, the word 'Lupulus' reminds me of 'Lupus,' which suggests 'wolves,' which makes me think of werewolves. And the word 'Maximus' reminds me of Russell Crowe's character in Gladiator. After three of these beers, I totally felt like a werewolf gladiator."

Chip: "The name is just so...manly. Simply ordering one is enough to give me a boner, much less drinking it. 'I'll have the Lupulus Maximus please and, yes, I am fully erect.'"

Sure, the hippest of local hipsters abandoned Arcade Fire shortly after their instantly-infamous set at the Jackpot many years ago, but plenty of local scenesters still trekked over to Starlight in KC last night for an evening of communal joy (centered around suburban malaise). Our friends at I Heart Local Music report that the band's set was full of "interesting little noises."

Head to their site for a full review with photos and videos.
Posted by Nog at 11:08 AM