We Prepare For Record Store Day and Sonic Bivouac at the Percolator (Starring the Leotards!)

This Saturday is the hippest day of the year, Record Store Day, and we're ready. As usual, we'll be camping outside Love Garden on Friday night to be first in line for sweet scenester bargains.

Love Garden's got a new policy for early birds this year:

"We'll be handing out numbers to people just before we open at 10am. The first person in line gets the first number, and so on. Each individual will get to grab 5 items to purchase from the exclusives table. We'll proceed through all the numbers until everyone who was in line BEFORE 10am gets their turn at the exclusives table. After everyone with a number has had their turn, then we'll lift the 5 items per-person limit."

Since most true hipsters sleep till noon on Saturdays, we figure the five hippest items on the exclusives table will be all ours!

The Republic Tigers, slated to perform at the store that day, have cancelled, but we're not too bummed: they aren't very hip anyway.

Go here to watch a lovely "visual tribute to the indie record store" set to The Brunette's "Record Store":

The most rumored, most feared, and least seen band in Larryville makes a rare public appearance this Saturday at the Percolator, 5:00 pm sharp, as part of Craig Comstock's fourth annual Sonic Bivouac. Yes, we're talking about The Leotards, which consist of local punk scholar and Replay habitue King Tosser on guitar and S. Stix on lead vocals, sultry screams, and simulated sex noises.

Also on the bill: Comstock's This Is My Condition, Drakkar Sauna, and Jonathan Nilsson-Nagel. Go to this event. And go here to read the origins of Sonic Bivouac and confirm your attendance on the event's FB page. 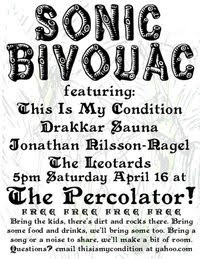