While most local scenesters were contributing to the Earth's destruction by purchasing tons of vinyl at Record Store Day, we were down at South Park, visiting with the anarchists from Solidarity, who gave us a "seedball" and some literature on its purpose: "Toss this seedball anywhere soil is exposed and help the earth regrow herself into what she wants to be...".

Chip: "I assume it's a ball of marijuana seeds?" 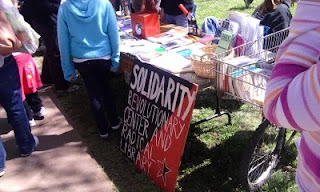 Afterwards, we arrived early to Craig Comstock's Sonic Bivouac "noise festival" and perused the cardboard installations at the Percolator. Can someone please buy this giant bear for Chip on his birthday? 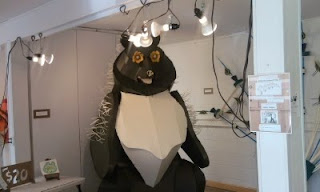 And then it was time for the Leotards (King Tosser and Stephanie Stix) to make a rare public appearance, treating us to an afternoon of songs about cocks, ranging from the punk swagger of "Cock Jokes" to the sexual frenzy of "Sugar Dick."

Oddly enough, several in the crowd were munching on bananas during the set, adding to the evening's phallocentric theme. 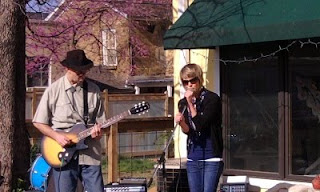 Drakkar Sauna were up next. It's hard for anyone to follow a good old-fashioned "Leotarding," but these scenester stalwarts did manage to restore a bit of the evening's promised "family-friendly" atmosphere by warning their own children not to play in the almost-certainly-contaminated stream of water flowing through the Percolator alley.

(notice the completely empty seating area...as always, we scenesters were in the very back, chatting obnoxiously during the sets). 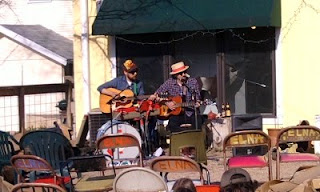