Here's a recent Craigslist entry from a young lady seeking a bluegrass-picking gentleman she spotted at Mudstomp Mondays.

"i dont know what that instrument is called, its like a tiny guitar and you play it really fast...sexy...anyway i saw you on stage at the granada on monday...first time at "mudstomp monday"

Richard: "It's a ukulele, and it's not sexy unless it's played, slowly and sultrily, by certain local hipster women."

Chip: "True. Though I admit to looking forward to Eddie Vedder's ukulele album next month."

Richard: "Chip, that's one of the most unhip things I've ever heard you say."

If you're a Larryville progressive, you likely found yourself talking politics at the Eastside "Yart Sale" this weekend with esteemed Eastside President Deron B. We did, and he handed us a stack of literature to peruse before casting our votes in this Tuesday's election, which will fill three City Commission spots. The paperwork contained a list of candidate responses to issues such as this:

"Neighborhoods are suffering from the chronic nuisance created by party houses."

From what we've gathered, ALL the candidates are opposed to party houses.

Chip: "Wouldn't it make sense to have at least one candidate who came out in favor of party houses, to capitalize on the youthful demographic who has no fucking clue there's an election this week?"

Richard: "Agreed. I hate to think that I might elect someone who'd prevent me from ever attending another Rooftop Vigilantes house party or who might attempt to shut down the Pizza Power house. That said, I'll be voting for Sven Alstrom, because I like the name Sven and his cool signs all over town."

Bone up on your local politics at the LJ-World's election section here and we'll see you at the polls.

While most of Larryville was focused this week on the car that rammed through the Vision Clinic (insert jokes about new glasses here), another fascinating instance of driving under the influence got less attention. The LJ-World's report ends with this statement: "The suspect, who had exited the vehicle carrying a sledgehammer and boots, continued away from the scene through a parking lot near Dempsey's Burger Pub, 623 Vermont."

Was he planning to use that sledgehammer to attack Free State Brewery? It certainly seems as effective a tool as a railroad spike, if not more so. Perhaps we'll never know, but luckily Twitter-user @rikkikite posted on the message boards her photo of the suspect preparing to wield his sledgehammer like Thor's hammer: 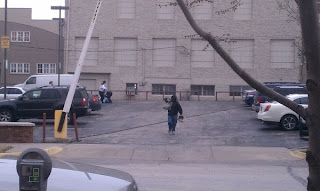 Uke till you Puke said...

Nellie McKay is the sexiest ukelele player I know of, but her appearances on Prairie Home Companion may make her fatally unhipsterettish.