We Attend the Kanrocksas Press Conference / Scenester Pick of the Day: Shilpa Ray and Her Happy Hookers

There's been a bit of gathering buzz this past week about a monstrous KC summer music event called "Kanrocksas." What is it? Where will it be held? Why does it have such a silly name?

In another sure sign that our shenanigans are often taken too seriously, we were invited to attend today's "press announcement" at the Kansas Speedway, so we can answer most of those questions from firsthand experience: it's a giant festival expected to draw 100,000 fans to the Kansas Speedway in August to hear headliners Eminem and Muse (excuse our ignorance on the latter, as we barely know who they are, much less that they were a headlining act). Other acts announced so far include a few more scenester-approved names--Black Keys; Kid Cudi; Girl Talk--as well as, inevitably, The Flaming Lips (it's just not a festival these days until Wayne Coyne rides a giant hamster ball over your head).

Obviously, scenesters avoid any festival that involves such hippie-approved activities as camping, but at least the camping at this festival will involve none of the usual hardships of a more isolated setting such as Bonaroo: one can simply stroll over to the Legends and grab a Jimmy Buffett-burger instead of rubbing two sticks together to start a fire. Also, the camping and parking is free (pretty rare). So if you've got $179 for a two-day pass and enjoy the bands, we won't hold it against you (too much). As for us, we'd probably rather see 59.6 shows at the Replay for that price.

Here's a shot of the press conference: 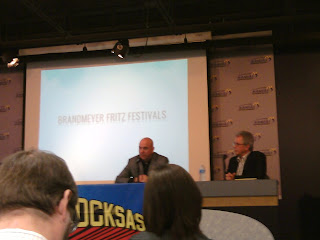 And here's a shot of the sweet freebies we scored (Richard: "I've already got a PBR in my camouflage Kanrocksas beer coozie."). If we were inclined to stay out till 2:00 on a Monday and wade through not one, not two, but three opening bands, we'd totally see Shilpa Ray and Her Happy Hookers tonight at the Jackpot.

Look at this review from www.panicmanual.com:

"There were a few things that were notable about Shilpa Ray and her Happy Hookers. Firstly, Ray plays the harmonium, an unusual instrument for a rock band. Secondly, when she sings, Ray seems to be able to open her mouth up really wide and out of that mouth comes an impressive blues/punk wail."

Chip: "Harmoniums are hip and the statement about the really wide mouth arouses me. I'm going." 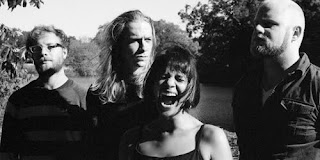