Here's that review in full:

"I was back at my folks’ house over the holidays watching TV with my dad when an ad for Martin Lawrence’s latest opus Big Mommas: Like Father, Like Son came on. My dad watched in complete silence, then, staring straight ahead, murmured, “Black people and white people will never understand each other.” I feel this way about the East Coast and the Midwest, and this record is my Big Momma’s House."

Chip: "First off, the Big Momma series is fucking funny for everyone, so I fail to see what this guy's on about, or how a movie about a big fat black lady played by a man has anything to do with this record."

Richard: "I'll disagree with your first assertion, Chip, but I too fail to understand how Martin Lawrence's broad comedy (which borders on minstrelsy, I might add, but that's a topic for a more serious blog) is comparable in any way with the subtle indie pop of Hospital Ships."

Our buddies over at I Heart Local Music offer a closer look at the Twitter debate that took shape between Vice and Hospital Ships, as well as their own (much kinder than Vice's) thoughts on the new record. Check it out here

With almost zero publicity except for the Jayplay, The Adult Swim Block Party arrived for its second appearance in Larryville last night, once again without beer (Larryville, is it THAT hard to obtain a liquor permit for such events?). We arrived just in time for the evening's "Hairiest Man" contest. But none of the contestants seemed especially hairy. Unwilling to wait in long lines for an hour to obtain a free Adult Swim frisbee, we adjourned early in Curren$y's set and joined the old folks at the Lied Center for a delightful evening with Del McCoury and the Preservation Hall Jazz Band, which culminated in a second-line, Mardi Gras march through the Lied with an army of locals twirling their umbrellas and following the band on stage. Verdict: unhip, but fantastic. 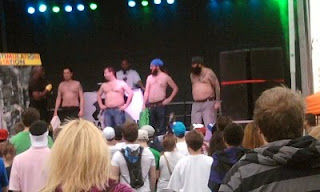