We're always looking for new bands who offer us a spectacle on stage (as opposed to the usual indie scenester bands who treat their sets like a minor interruption of their evening of PBR-drinking). Philadelphia's Dangerous Ponies, slated to hit the Replay tonight, may just fill our needs. Look at some of their press material:

"What do you call an EP by a rainbow pop-rock band called Dangerous Ponies that has eight members, three of them being hype-men and women donning fantastical costumes? Obviously, you call it Dr. Ponie, Medicine Ponie."

With song titles like "I Only Wear My Favorite Clothes at Home" and playful album covers like the one below, we predict the kind of adorable evening that's all too rare since the Transmittens left town.

Chip: "If I don't leave this show covered in glitter, I'm asking for my money back." 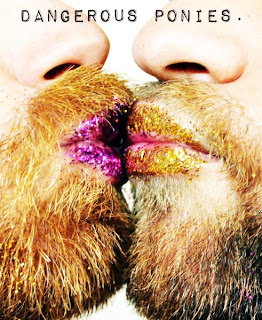 No one can accuse the Pulitzer committee of making an unhip choice for this year's prize-winner for fiction. They could have easily gone for Franzen's much-praised Freedom (which would have been hip enough), but instead they've awarded the honor to Jennifer Egan's experimental, rock and roll novel A Visit From the Goon Squad, which contains a 78-page reproduction of a power point presentation called "Great Rock and Roll Pauses." We were singing its praises way back in July, if you'd like to refresh your memory here . We can assure you that reading this book increases your hipster quotient greatly, although it certainly would have been hipper to read it prior to its Pulitzer win.

Here's a page from the power point section (click to enlarge):

Richard: "I think this is the very page where I was reading along and suddenly muttered to myself, jealously, 'Egan's got the Pulitzer.'" 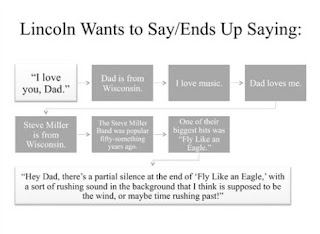 on behalf of the Captain said...

We think it's safe to say that your praise gives the Captain a boner.