Local Election Recap / Middle of the Map Fest / Hashtag of the Month: #TKAMB

The votes are in, and Sven did not win. According to local talkbackers on the LJ-World message board, the bankrupt Sven can go back to what he normally does: posting on the message boards under numerous aliases.

But how many write-in votes did Chip get in yesterday's contest? At least two, from Chip and Richard (Chip: "Actually, I just drew a picture of myself. With a boner.").

After driving the hippies and their Wakarusa Fest out of town and down South to Mulberry Mountain, one would think that Larryville could establish a music festival more befitting our scenester aesthetic. Last year's Garage Fest was awesome, but it was (presumably?) a one-off event. And even our North vs. South (Minneapolis vs. Austin) Festival has ditched the Replay and the Jackpot for KC in recent years.

This weekend, KC hosts a new scenester festival, Middle of the Map Fest, in the bars of Westport. Perhaps the biggest draw is Daniel Johnston (mental illness is always hip). In addition to national acts such as Johnson and Cursive and The Raveonettes (who also rocked Garage Fest), the festival also features numerous local and regional bands worth catching, such as Larryville's Appleseed Cast and KC's The Life and Times and Capybara, a band we've been wanting to see for some time now, especially after looking at this adorable photo of the band members hanging out with their namesake creature! 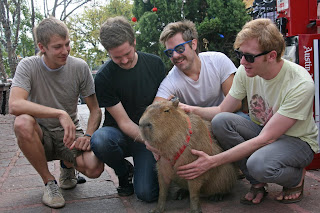 Our Read Across Lawrence/Twitter Book Club discussion of To Kill a Mockingbird is so popular the hashtag #TKAMB has begun popping up in sidewalk chalk at KU. Look closely at the below photo and you'll see the hashtag and a picture of a mockingbird! Join us on Twitter and find out how the book compares to the post-modern texts we normally devour (hint: it's better!). 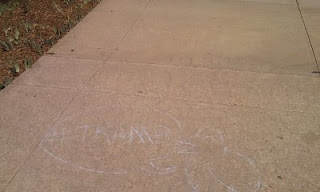