Final Fridays Coverage Begins: Giant Inflatable Suits and Scenester Portraits / Plus, Ex-Fag Cop Plays a Set in a Hole in the Ground

The next Final Fridays is on the horizon and here are a few things we're excited about:

"...one of the artists [from the Lawrence Arts Center show] will be doing a performance at The Spencer Museum of Art in his 35' inflatable suit... After the Spencer performance, the artist will be changing into the "much more practical" 10' inflatable suit and walking/bouncing down the hill into downtown, ending at The Lawrence Arts Center." (L.com).

Chip: "I hope that the city has completed the lighted pathway through the student ghetto, because it will be VERY easy to mug a dude in an inflatable suit as he bounces his way downtown. On second thought, artists don't have money, so I suppose he's probably safe after all."

We're also hyped for the "Just Hangin'" show at the Q5 gallery upstairs at Quinton's. Our friend Leo Hayden is currently working on a portrait of local scenester/Bear Club CEO Phil Canty. Here's a work in progress (thanks for letting us post it, Leo and Phil): 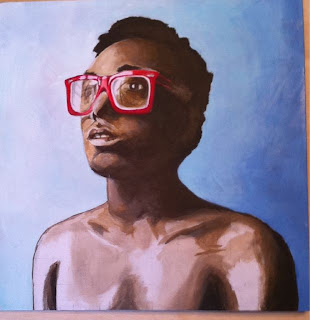 Rumor has it that Leo will soon begin a portrait of our friend "Chip," who wants be immortalized in the local arts scene while sporting his usual boner (which we hope will be implied, more than shown, in the painting).

You can check out the hashtag #paintingphilcanty to watch the evolution of the portrait.

And visit the Q5 gallery site here for more details on the show.

It's barely hip to play the Replay or the Tap these days. The hippest bands in Larryville are now performing their shows in a hole in the ground. Thanks for the tip, @ValueShock. To be honest, we weren't even aware of this trend, but we hope many bands will soon follow suit. Go here to watch Ex-Fag Cop jamming in what appears to be some sort of debris-strewn pit.
Posted by Nog at 7:44 AM

Church of Malt Liquor has really shitty acoustics. I like it. I'll be attending a few shows there this summer for sure

I'm excited for the Quinton's showing! It was delightful last month.

I'll ONLY attend shows these days at the Church of Malt Liquor.