If you're an avowed Anglophile like us, you stocked up yesterday on warm beer, scones, eggs, bangers, fish, chips, and mushy peas and pulled an all-nighter to watch the Royal Wedding.

Chip: "All the pomp and circumstance (and Kate) added up to a royal boner."

But now it's time to proceed with local activities, first and foremost being the annual Brown Bag Drag Show at KU at noon today. This is the culminating event of KU's month long celebration of "Gaypril," and the only group that loves the spectacle more than Larryville liberals is the Westboro Baptist protesters, whose chants of "Gaypril" are likely to be significantly less celebratory than those of the participants and fans.

Tonight brings another Final Friday art walk. In addition to GIANT.INFLATABLE.ART outside the Spencer at 5:30, we plan stops at Q5 upstair at Quinton's for the unveiling of Leo Hayden's Phil Canty portrait (mark our words: this piece is going to be the Mona Lisa of Larryville!) and Wonder Fair's "Pyramid Lake" opening, with possible detours to a "flash-space" event called "Blame the Moon" (Chip: "I often do") and to Love Garden, which is hosting a performance by Justin Marable's Interior Sea at 8:00.

It's a busy day to be hip in Larryville, and you'll need a meal or two as you make your way from event to event. Perhaps you should check out this piece from www.foodisthenewrock.com in which one of our most influential musicians, the Get Up Kids' Matt Pryor, discusses his favorite local restaurants, which include the usual suspects (715, Free State, Wheatfields) but is noticeably lacking in Krause-restaurants. Perhaps soon we'll all be adding downtown's Curry in a Hurry (which opened Wednesday) to our own personal list of hotspots?

And here's a picture of Matt Pryor holding a chicken: 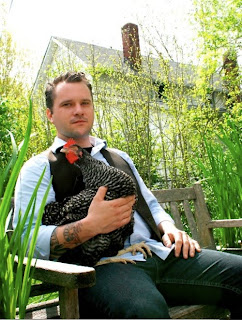 I heard that Kate had a nice ass...or was it that William's brother was an ass? I guess I wasn't paying attention...