The Daily Meal just voted Larryville as one of "9 Great Small Food Towns in America":

"The town has a surprising spread of cuisines like Central American food at La Parrilla and a booming gastropub scene with Dempsey’s Burger Pub and Free State Brewing Company leading the pack. Go for the basketball, stay for the food."

Read the full list and watch a slideshow here

One Eye Wilbur says: "What Lawrence does NOT have that some of the others do have or very close by is: A German Restaurant. Lawrence dining is hardly exceptional when most of it consists of mexican, mexican, mexican and chinese, and more chinese...Lawrence has a sister city in Germany and still cannot get anyone to serve up a schnitzel in Lawrence.

Maybe we ARE weak in the German department, One Eye, but Mass. Street (with the exception of Pickleman's Deli and the return of Chip's beloved-but-hardly exceptional Jefferson's) is getting "foodie"-r by the day. We're particularly excited about the arrival of Curry in a Hurry, which is moving out of its former gas station home and into the big-time. 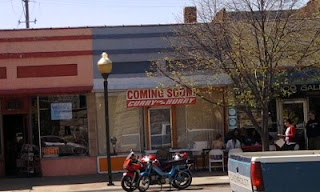 We tend to pay close attention to South By Southwest and the Pitchfork Festival while mostly ignoring Coachella, perhaps because it has "hippie" associations (by virtue of being large and occuring in California). But this year's event, which wrapped up last night, caught our attention with such acts as Arcade Fire and The National (anybody planning to catch them at Starlight this week?), as well as our beloved Animal Collective.

Our friend Captain Chanute, however, was interested in one band and one band only. That band? Duran Duran. We offer you his thoughts on the their performance, which he watched on-line via live webcast (sadly, we could not afford to send him to the festival for a first-hand review):

"If you're like me, and you're too busy slaving for the man to go out and have fun or if you're a recluse that knows virtual fun is better than real fun (which you likely are if you're reading this), then you probably joined me for the live webcast of Coachella this weekend. If you happened to miss it, I'll fill you in on some of the dirty details. Well not all; the Captain only watched one band—a band that created it's own niche at the intersection of media, fashion, consumerism and...androgyny: Duran Duran.

If one had only heard the concert (or were blind, I guess), one would have mistaken it for the DD of yesteryear. Now in their 50s, the prettiest boys in rock played some of the trusty favorites for the smattering of people in the crowd born before 1990, opening with the farsighted New Romantic banner song “Planet Earth” and following with “Hungry Like the Wolf.” They also played energetic, precise versions of “Notorious” (likely garnering some confusion from many young music aficionados who thought it only a sample from B.I.G. Songs), “Ordinary World” (which will be played at the Captain's funeral) and “Rio.”

Judging from the set list, one may think that DD simply played it safe. However, the Brummies inserted new singles from All You Need is Now, their 13th album effort, to stunning fanfare. Mixing trademark new wave elements with contemporary stage complexities like a strings section, an appearance by Ana Matronic from the Scissor Sisters and multiple outfits changes. The new material went over well with the barely legal crowd, mixing catchy dance ballads with an increasingly multifaceted and mature presence seen in all the old hits.

From my own perspective, I found “The Chauffeur” most catching. Spinning in footage from the original video, Simon LeBon donned a driver's cap and played his orchestral flute solo with the glow of electric sex gyrating in the background. Simon then changed into his best 007 white tux for a rendition of “A View to A Kill” before segue-ing into their final piece, “Girls on Film,” a song about blatant sexual fetish—quite apt for the day. In the extended presentation of the song, string accompaniment played pieces of Robbie Williams' “Millennium” and background singers joined Simon in spitting a few verses of Gaga's “Pokerface” while keyboardist Nick Rhodes snapped photos with his digital camera of the goings-on on-stage and in the crowd.

In sum, DD put on a show for everyone. To the tens of thousands of listeners who were too young to enjoy the cocaine- and side-project- fueled 80's, it was a fitting presentation. To the fifty or so people that found this as nostalgic as the Captain, it was downright orgasmic in the most homoerotic sense possible. I can leave off with saying that Duran Duran, for the moment, is back. Rather, they're still here. After 30 years of make-up, millions of miles traveled, even more screaming girls following in tow and some questionable material including Timberlake, DD is still at home in the Captain's heart."
Posted by Nog at 7:37 AM

I can't believe that DD had the audacity to NOT play "New Moon on Monday," their only decent song from a shitty catalog that spans three decades. If it wasn't for the gram of coke I snorted, that DD set would've put me to sleep.

Face it, this is a foodie town. Go read the thrilling article about 'taming' a bland white soy curd over on your sister site if you dont believe me.