Perhaps you're reading today's entry while waiting in line to vote at your local polling place (that's a joke: there aren't any lines). But that doesn't mean folks aren't interested. The LJ-World talkback forums are buzzing with ideas about Sven's bankruptcy, along with obscure suggestions for write-in candidates, such as this one from somedude20:

But we turn our attention today to literature. The most important literary event of the year--the release of David Foster Wallace's posthumous novel The Pale King--is almost upon us: it's slated for an April 15th Tax Day release, timed to coincide with its subject matter of IRS agents.

TIME magazine offers an excerpt from the novel:

Richard: "I predict the entire novel is exactly like this and, if so, I'm already prepared to declare it a masterpiece."

A few years back we participated in an on-line summer reading and discussion group, Infinite Summer, which tackled DFW's massive Infinite Jest, and we had a blast with our daily discussions of The Mad Stork, tennis arcana, wheelchair assassins, armies of feral hamsters, Canadian double and triple-agents, The Year of the Trial Size Dove Bar, and page after page after motherfucking page of footnotes. If The Pale King offers 1/3 as much joy and frustration, count us in.

"The Anniversary, only with more noodly keys and banjos? What the fuck? Okay, wait, I take that back — actually, this is nearer to The Postal Service with banjos, or maybe Mates of State, or…hell, make that a combination of all three. The Seedy Seeds wed sweet, bumping keys and rhythms to banjo and accordion, then throw gorgeous melodies and earnestly-dueling indie male/female vocals on top of that, and the resulting amalgam is both fairly unique and pretty damn cool." (www.spacecityrock.com) 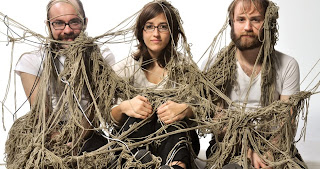