Larryville Gets An Interactive Cupcake Bar (Plus, The Mass. Street of Yesteryear) / Spot That Activist

Just when we were getting a bit tired of Three Spoons' self-serve, multi-topping "froyo" along comes news of another silly dessert shop on Mass. Street that we are sure to love: an "interactive cupcake bar" called Cupcake Construction Company. If you follow food trends, you know that cupcakes are very hot right now (Cupcake Wars is one of our favorite non-sleazy reality shows, second only to the new show Extreme Couponing). The "interactive" concept sounds complicated, but an article in the Town Talk section of the LJ-World simplifies the process:

"Here’s how it will work: Each day the store will offer a variety of cake flavors, multiple filling options, and several icings. Customers will be able to choose their cake flavor, their filling flavor and their icing flavor. The result will be that there are thousands of possible combinations, kind of like what you are faced with when you go to one of those build your own sundae shops. One other twist is that the store will try to break the trend of cupcake shops being all frilly and girlie. The store will have a construction-based theme. When “building” their cupcakes, customers will be told the cake is the “foundation,” the filling is the “interior,” and the icing is the “roof.”

Chip: "Genius. I love cupcakes, but I don't like their girliness. I predict this place will become a popular stop for frat boys on their way to Brothers, or Tonic, or wherever they go these days for an evening of Jager shots and date rape."

Richard: "If it's all the same to the owners, I'm going to go ahead and refer to the icing as the icing."

But sometimes we wonder what Mass. Street was like way back in the day, before gourmet burgers and "interactive cupcake bars," and even before our era of favorite bars such as the Replay, the Jackpot, the Tap.

This morning we stumbled upon an LJ-World discussion called "Dead Bars I Used to Love," which lists such establishments as the Sanctuary, Bierstube (the 'Stube), the Congo, Bogart's, Off The Wall Hall, Dirty Herbies, Four Winds ("Haskell's babe-mart"), Red's Place, and the Seventh Spirit Club. We'd love to hear more about this bygone era, so if we have any elder statesmen of the scene who still read this blog, we'd love to hear your comments.

And apparently there was also a bar called Quantrill's Saloon on Mass, circa 1979 (photo below).

Chip: "How was this bar approved? And did someone burn it to the ground?" 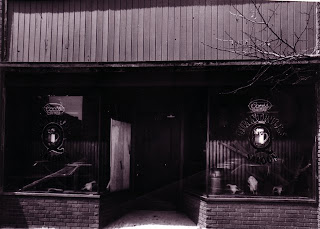 As promised, liberal protesters gathered at the Lied yesterday evening prior to Kobach's lecture (Kobach: “If you really want to create a job for an American citizen tomorrow, deport an illegal alien today") and carefully pre-screened Q&A. Name the activists below and we'll buy you a beer while discussing immigration policies. 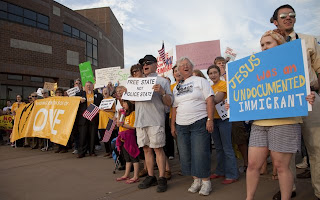