We spent Friday evening with the townies, basking in the sunshine on the Free State patio like a couple of turtles (scenester turtles) while being entertained by a busker magician, who posed for us.

Chip: "I thought buskers were only allowed on the streets during one designated weekend in August, so I quickly alerted the authorities." 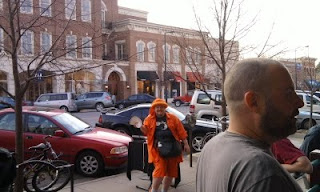 This morning brought one of spring's most-anticipated events: opening day of the downtown Farmer's Market. We stocked up on "goat butter soap" and Free State Oatmeal Stout cupcakes. 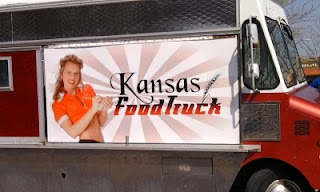 Chip was fascinated (and maybe a little aroused) by this painted statue woman holding court in the middle of the Market, but she wasn't a great statue: at one point she broke character and rushed off to retrieve a dollar bill blowing through the Market. 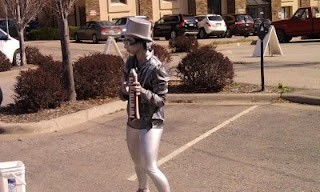 KC's Middle of the Map Fest is under way, and we're not attending. Luckily, we have Chewyfally's new site to insure that important musical events actually get documented in a timely fashion these days. Her report assures us that there were "Lawrence peeps as far as the eye could see" at the Festival's opening night.

Go here for thoughts on sets by The Casket Lottery and Appleseed Cast, as well as Micki Hadley's photos, which include these two dudes. Are they Larryville "peeps" too? 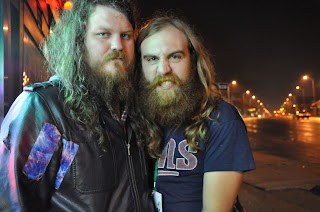 Hilarious. Thanks for the info.