Kansas Secretary of State Kris Kobach will give the annual Vickers lecture at the Lied Center on Tuesday night. Known for his instrumental role in drafting the controversial Arizona illegal immigrant legislation and for his current crusade against Kansas voter fraud (he believes the illegals are voting in high numbers), Kobach is, needless to say, not a favorite of Larryville liberals.

A group of outraged Larryville liberals: "Let's show our tolerance by shouting him down until we get thrown out of the Lied Center, like we did a few years back when Ann Coulter was here."

Chip: "Personally, I think it's nice to see the conservative position get represented for once in this town. However, I wish they'd gone with an even more controversial choice, such as Kansas Representative Virgil Peck, who recently made the comment about shooting illegals 'like feral pigs.' I bet he'd deliver a great lecture that plays as sort of a cross between FOX news and the Redneck Comedy Tour."

Richard: "I'm just going to ignore this event and bide my time until the Henry Louis Gates Jr. lecture on Thursday."

With liberal hero and notorious anti-religious comedian Bill Maher in town last night for a show at Liberty, it was a given that the Phelps' crew would be on the scene. Here's a photo from our Twitter friend @goodfox. This guy on his cell phone looks like he's a bit bored with his protesting duties. He couldn't even think of anything very specific for God to hate. 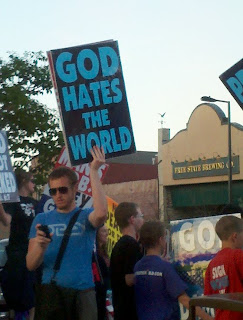 But Maher seems to have had a good time in Larryville last night.

He tweets: "Thank u Lawrence, very hip town, as advertised."
Posted by Nog at 7:11 AM