We Lament the Lack of PBR Art in Larryville (Plus: Other Larryville Mysteries)

Larryville loves its PBR and loves its art, so we're sometimes baffled by the fact that there's not an inspiring PBR mural downtown or, at the very least, a Final Friday showcase devoted to PBR art (especially since we know for a fact that a KC PBR rep has been trying to find a venue for such a show).

So we often find ourselves turning to www.pbrart.com for our fill of PBR art and related events, such as "Eye Fuck," in Boston, a "graphic display of PBR originality through the eyes of local artists and designers." 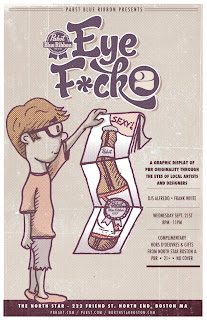 So step it up, Larryville artists, and make art such as this for us to peruse:

We recently put out a Twitter call for people to send us their #larryvillemysteries , things that puzzle them about life in #lfk , and the responses have been flooding (more like trickling) in.

Why there is no curbside recycling service. How in the world KCMO does it and Larry doesn't is a #larryvillemystery

How we only have one decent movie theater in this town & i am not talkin bout southwind!

What became of all the carpeted rafts the hippies built to shuttle skinny dippers to Lake Perry?

how come The Hawk hasn't been raided by ATF agents?

why would anyone go to Johnny's West?

How in the hell does Carlos O' Kelly's remain open?

And @RealSherylBaby (the Twitter feed of Dennis' doll) offers up this #larryvillemystery : my sudden growth spurt!

Thanks for the submissions!
Posted by Nog at 8:58 AM