This Week in Art: The Painted Donkey Project / This Week in Music: Folkicide / And Biemers Gets Patriotic

We clicked on L.com this morning looking for recipes for some nice autumn soups and unexpectedly came across the intriguing story of the Painted Donkey project:

"Organizers of The Painted Donkey: An Art Auction Event are asking art lovers to write “tales” of why they think the arts are important on triangle-shaped “tails” to be pinned on a cute plywood donkey."

The stories will later be sent to Governor Brownback. But will the donkey be sent as well?

Chip: "Interesting project, but I'd rather that hundreds of artists lined up single file and took turns stepping forward to call Brownback a jackass."

The auction, featuring the work of many artists, is at the Carnegie Building tonight. Full details over here

We have to thank the Pitch for the most interesting music news we've read this week:

"A handmade CD turned up in the mail the other day from Burnie Booth, a local guy who records under the name Folkicide. It's called Devotional Hymns From the Church of the Darwinian Snuff Film. The album art is a collage, the focal point of which is a nearly nude Filipina undergoing some kind of bloody voodoo operation involving a needle."

Folkicide is playing a "recording release recital" tomorrow night at the Record Bar and we are immediately starting a "bring Folkicide to the Replay" petition!

The article points out that Booth was once "in a band called Big Toe, which was a part of the hardcore scene centered on the Outhouse, outside Lawrence."

Anybody remember? If so, please share your Big Toe memories.

With the tenth anniversary of 9/11 on the horizon, you may have noticed a few tributes popping up on local business signs. Even Biemers took a break from their usual innuendoes ("Get R Sauce On Your Face") to offer up "9 11 Never Forget." We are moved. But we hope they are back to their usual antics next week. Our suggestion: "Lick Our Giant Sausages." 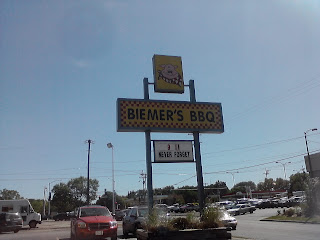 So glad to see someone's covering the important piece of local commentary that is the Biemer's sign! "We rub our meat daily."