We love scenester supergroups, and Wild Flag (featuring members of Sleater-Kinney, Helium, and the Minders) has us pretty intrigued. Their new album is out today. Since Pitchfork has yet to offer any effusive praise, let's turn to...SPIN:

"Has there really never been an all-female, indie-rock all-star band before Wild Flag? They're late, it's true, but also right on time...t'd be reasonable to expect a "mature" rock record from this quartet, or at least a few of the bittersweet lamentations mandatory for all ex-punks pushing 40 (call it "Wilco syndrome"). Instead, Wild Flag offers odes to volume and youth ("Romance," "Future Crimes"), suggesting the barely contained frenzy of teenagers."

Richard: "I'd prefer 'bittersweet lamentations,' but this will do."

Chip: "I've never heard of this 'Sleater-Kinney,' but isn't Carrie Brownstein the woman from Portlandia? She's funny. I hope she performs some of her sketches when they play at the Record Bar next month. 'Put a bird on it!'"

Why would a band change their name from Gobble Gobble to Born Gold? Anyway, as best as we can tell, it's the same band, and they are at the Jackpot on Wednesday, doing weird electro-pop shit. Here's an interweb review from www.theaudioperv.com :

"The band at one point even had shovels, a leaf blower, a spaceman sheet creation, a fake ear, human body props, tutus, stilts, circus pants, a giant tent, confetti."

They had us at leaf blower. Born Gold's debut album, Bodysongs, is out on Sept. 20 and the cover looks like this: 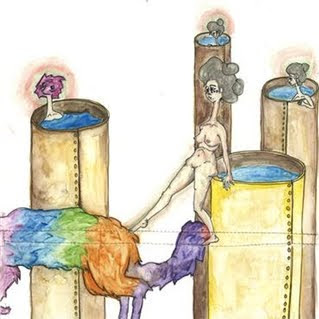 We haven't heard from Asteroid Head Art Club in awhile, but they've resurfaced with a new "signature cocktail," The Asteroid Head, which (we think) will be available at Pachamama's starting today, along with a new art exhibition. The closing ceremony will occur on this month's Final Friday:

Check out the Facebook event page for important tips about ordering the drink:

"Tell them Jacques sent you, and it will come with pop-rocks on the rim."
Posted by Nog at 6:13 AM