Readers, let's be honest with ourselves today. In our heart of hearts, behind the facade of cultural sensitivity, what we really want is to get hammered and watch midgets hurl each other around a ring.

Tonight is our chance. Extreme Midget Wrestling comes to the Granada to thrill us all with its pint-sized antics!

We checked out the Extreme Midget Wrestling Federation website today, which requires registration before you get very far but promises that "You will be able to interact with other fans and of course our midgets!"

A concerned Larryville progressive: "I'm terribly concerned by the use of 'our' midgets in that sentence. No doubt these midgets been sold into slavery or, at the very least, indentured servitude and forced to fight for the amusement of drunken rednecks and frat boys."

Chip: "If I pay extra, will I be allowed to get in the ring and wrestle with one of these midgets myself?" 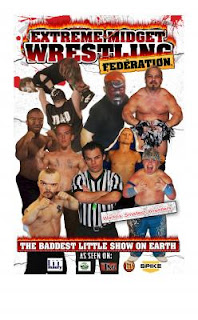 Or maybe you're looking for something bizarre but not quite so "extreme" as Extreme Midget Wrestling. Consider the Next Level Games at Watson Park this Saturday:

"Beginning at 9 a.m. on Saturday in Watson Park, about 50 people will compete in the third annual Next Level Games, a type of strongman competition that will involve flipping 400 pound tractor tires, pulling a half-ton truck down Seventh Street (Seventh between Tennessee and Kentucky will be closed during the event), pushing a weight sled 160 yards, and other such child’s play." (LJ-World Town Talk column).

Chip's reading interests fall into three categories: pornography, sports, and poetry. A new novel by Chad Harbach called The Art of Fielding delves into two of them:

"In fact, the novel is so rife with literary allusions that you have to wonder whether Harbach, who studied English at Harvard, cares more about baseball or books: a sport, or a pastime? Besides Lowell and Melville, there are explicit or implicit references to Emerson and Dickinson and Whitman, to “Death in Venice” and "A Prayer for Owen Meany"; even the title, “The Art of Fielding,” can be read as a winking reference to that other Henry, who knew something about satiric novels" (NY-Times).

So what's this thing about anyway?

“The Art of Fielding” isn’t really a baseball novel at all, or not only. It’s also a campus novel and a bromance (and for that matter a full-fledged gay romance), a comedy of manners and a tragicomedy of errors — the baseball kind as well as the other kind" (NY-Times).

America has waited a long time for the first great gay baseball novel!

Perhaps this will be a future read for the PBR Book Club, which is currently going strong with discussions of Cloud Atlas from Richard, Bananasuit, and Courtneybelle (nothing from Chip, yet). Crack open a PBR and come join us at the club where, in today's entry, Bananasuit is promising/threatening to discuss "equestrian transformation motifs" in Ukrainian folklore. We're not sure why!
Posted by Nog at 12:22 PM