Twee Band of the Week: Twin Sister / (Scary) Local Tattoo of the Week

It's fall, and that's when we always miss Transmittens the most. We're looking for a new twee band to listen to while we traipse around through falling leaves and look at puffy clouds. Perhaps the new Twin Sister album, In Heaven, will do:

"More interested in documenting life's minor moments than the big, transformative ones, they sing about things like recommending movies to friends or having an awkward crush go unspoken...This type of narrative might skew a little twee for some...[but] it's important to point out that they buoy these bashful sentiments with some really outward, bouncy music. (Pitchfork, 7.8).

"The best twee music is girded with steel. On “In Heaven,” Twin Sister’s first album, Andrea Estella sings in a small voice, her aims and ambitions under control. She sounds amused and engaged, repeating lost-in-thought lines over and over... The band gazes lovingly into the synthesizer presets of late 1970s and ’80s soft-pop, which is nothing new, but it goes deep... It’s as if some gifted and cloistered young minds had just been introduced to, oh, the Tom Tom Club, Vangelis and the English language" (NY-Times)

Let's clamber up on this Soundcloud and spend the afternoon listening to "Gene Ciampi," why don't we?

Look at this adorable quintet! They'll be opening for The Pains of Being Pure at Heart on Oct. 13 at the Bottleneck and we plan to join them. 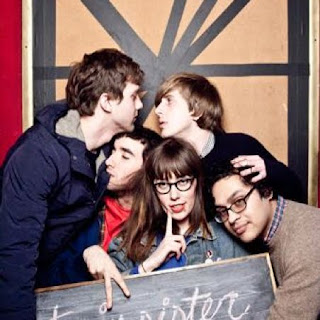 Our Twitter-buddy @GrandmaSlump sent us this picture taken recently at Pizza Shuttle in Larryville. It's a "simplified Confederate flag." Chances are this guy will kick our ass if we say anything snarky about him. But probably he was simply passing through liberal Larryville on his way back to Top City, so we doubt we'll run into him at the Replay. 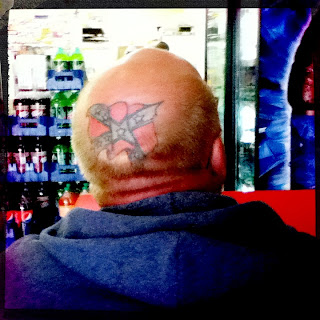