It's a good day for Larryville progressives, as Larryville's City Fathers (or at least 4 out of 5 of them) approved a new gender identity ordinance last night "providing new legal protections to people who are transgender" (LJ-World).

But let's see what the talkbackers are saying, starting with this hateful missive:

AOD506 says: "Ahh, the power of the vote. OK, Like I said a couple of days ago, lets get it together and start listing the names of the traitors, so we can vote these commissioners out next election. All except for Mr.Amyx. America wasn't built on the backs of Trannys. It was built by Red, White, and Blue blooded heterosexual men and women. Send the freaks back to California."


And here is a (confusing) rejoinder from geekin_topekan:

"Umm, unlimited resources secured via genocide and human trafficking in the name of Christ-- Where does R,W and B come into this? Get over your the myths about American (pron:Ah-mer-kin) history and realize that the entitlement complex goes way back, way before the welfare age. I have no numbers as to how many of the Chinese, which made up 90% of the railroad labor force, were in fact gender identified. Do you?"

Chip: "No, I don't, but I think I once spotted a film called 'Chinese Trannies' in the back of Miracle Video."

If you've noticed that the downtown art scene hasn't been weird enough lately, it's probably because Wonder Fair has been closed. But the gallery is back in a big way this weekend (under new ownership) with a rock show tomorrow and a Final Fridays exhibition.

Thursday's festivities will feature the ACB's, Kusikia, and Mega Bog.

We first thought that last band was called "mega-bong," which is what you should probably hit before coming to the show and rocking out with some free ice cream. Head over to the FB event page and tell them you're coming). 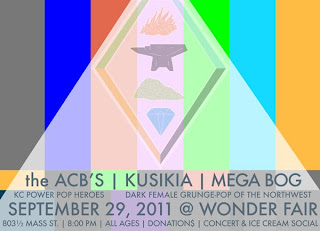