Picks and Pans, Vol. III: A Brownback Picnic, A PBR Book Club, and a Pretentious Romanian Film About Adjectives

Readers, the days of the Sanctuary occurred long before our scenester reign in Larryville but, based on this well-written FB event page for tomorrow's reunion party, they sound kind of awesome. Excuse us for printing the full write-up, but we know most of you won't actually click and read the link if we don't:

"In Lawrence, Kansas, during a decade widely recognized as the 1980's, The Sanctuary, an all lumber, part roadhouse, part ski lodge, multi-level bar/restaurant/night club nestled away from the street at 7th and Michigan in a lush wooded area was true to its name as KU students, townies, greeks, freaks, white, black, brown, red, yellow, gay and straight found refuge from the artificial confines of social hierarchy, cultural blandness, and mainstream musical mediocrity. If rival nightclub Gammons was the cultural Death Star of Lawrence, The Sanctuary was the Rebel Base.

The Sanctuary DJ's, David Randall, Lisa Wilson, and Ray Velasquez forged a fresh and innovative musical direction fusing rock, hip hop, post punk, funk, and disco with select pop hits of the day, serendipitously mirroring the sound of downtown Manhattan. The one in New York, not the one in Kansas.

For the first time since 1983, the original crew, the crowd, and the surviving sinners of The Sanctuary's deliriously decadent golden era will gather for The Sanctuary Sunset Soiree. Returning from New York City for this event, Ray's back behind the beat.

The Sanctuary Sunset Soiree. For some, a harmless stroll down memory lane. For the rest of us, a stagger and a step closer towards the end of the road."

After all of our recent explorations of Larryville lore, we plan to be on the scene gathering stories (or maybe just dancing with some old folks).

Brownback is throwing a party for state workers in Top City on Friday and giving free ice cream for the first 2000 arrivals. How is this a dick move? Well, does free ice cream make up for shitty treatment the rest of the year?

Chip: "There BETTER be a wide array of flavors at this event. I'm talking mint chocolate chip."

We'll watch any film about a part of speech and adjectives are one of our favorites. Here's an excerpt from the NY-Times review of this acclaimed Romanian award-winner:


"True to its title, the new Romanian film “Police, Adjective” is a story of law enforcement with a special interest in grammar. Its climactic scene is not a chase or a shootout, but rather a tense, suspenseful session of dictionary reading."


Cute band of the day: Deerpeople (playing the Replay tonight).

Go to their Bandcamp and listen to a song called "Dr. Gay Washington" from these adorable Oklahomans. 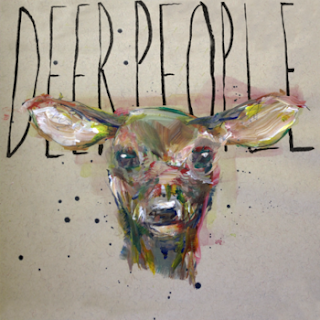 At long last, we're teaming up with that zany BananaSuitLibrarian to start a "PBR Book Club" which will meet occasionally and expound pompously and drunkenly on important hipster texts (mostly contemporary and meta, no doubt). Our first choice is David Mitchell's Cloud Atlas. The first meeting is tentatively scheduled for Sept. 29 at 9:00 at Replay. And don't be intimidated by these frightening tomes: the majority of the meetings will no doubt consist of Chip drunkenly reading things out loud.

"What appears at first glance to be a novel is in fact six novellas whose interrelatedness is only hinted at during the book's first half, then revealed fully and splendidly after the book's middle, which is really the book's end. Confused? You're supposed to be, at least for a little while: It's from this starting point of dislocation that Mitchell begins a virtuosic round trip through the strata of history and causality, exploring the permanence of man's inhumanity to man and the impermanence of what we have come to call civilization."

Chip: "When I choose the book it's going to be something a little bit sexier. Nicholson Baker's House of Holes, probably."


House of Holes excerpt of the week:

Now that we've FINALLY scored a copy of Baker's much-touted, wildly filthy new House of Holes from the Lawrence Public Library (we weren't sure you perverts were ever going to return it!), we can tease you with occasional bits of raunch. Be warned: not a single page is safe for work.

"Just then her attention was diverted by something stiff and warm tracing the curve of the arch of her foot.

'Yes, that is my cock," said Alexander Borodin. 'It is very hard and very famous.'"

Chip: "There's no question it's the best book I've ever read."