If you're any kind of scenester, you already know that the Rooftop Vigilantes are back, that they have a show at the Replay tonight, that the legendary second album is about to see the light of day. Maybe you read the Pitch piece by @nuthousepunks yesterday. Or maybe you read the Riot on the Plaza
review yesterday.


So there's not much for us to add at this point. We just ask that the Vigilantes keep that fucking racket to a minimum tonight (amps at 11 instead of 12), because our PBR Book Club will be holding its first "official" meeting out back.

Chip: "Come for the literary debate. Stay for the drunken librarians."

Elsewhere in town this evening, Baiowolf will be up to their usual hijinks at the Bottleneck, which look something like this: 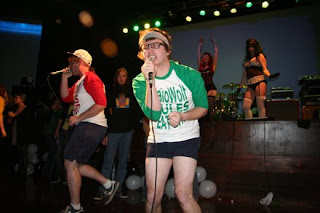 And ACB's will be rocking at Wonder Fair (see yesterday's post).

If you need help writing sex scenes, we hope you've signed up for the "Writing Fabulous Sex Scenes" workshop this Saturday from 9:00-12:00 am at the Writer's Place in Westport: "We’ll write during the workshop, then read our efforts to see if the readers are convinced. If you don’t get excited, your reader won’t either."

Chip: "I call this 'the boner test.' This is going to be a really fun morning."

It will cost you $45 bucks to enroll, but we suspect it's worth it for the weirdness.

In the meantime, would you like to read Salon's piece about the best sex scenes of 2011? Sure, you would. Their contest is all very high-brow and literary and judged by a panel of esteemed writers and critics including "Walter Kirn, Maud Newton, Louis Bayard and Salon's own Laura Miller." The winning passage is from James Hynes' Next (which we've read and loved, and not just for the dirty parts, of which there are many). Go here and check it out if you're into such things.

"The porch railing creaks under their weight, and even drunk and excited Kevin wonders about the farmhouse's craftsmanship...".

And here's Mayard's analysis of the scene: