If you've been around LFK for awhile, you likely remember Sam Billen from his days with The Billions, which also featured  his brother Dan (we love bands of brothers!).  Or maybe you know him as a prolific solo artist.  Or as a bringer of Christmas cheer (he's released at least five consecutive Christmas albums).   But perhaps you're a young whippersnapper on the scene who's unfamiliar with his work.  After all, he doesn't play shows that often these days.

We were pleased to catch up with Sam in this interview in which we discuss Places (his new album),  Saltine crackers, the difficulty of playing quiet and contemplative music in a room full of babbling scenesters; and his legendary days on a "compound" just outside of LFK.

Check out Sam's official site here.  And you can listen to Places and a lot of his other output via Bandcamp.

Enjoy the interview, and make sure to click the links along the way for detours into awesome music videos from Danny Joe Gibson and new songs from Dan Billen.


Chip:   There’s such an introspective and philosophical quality to your music and, frankly, it makes me nervous, as I tend to prefer more straightforward songs about drinking and screwing.  Tell us about Places.  What feelings do you hope to inspire in your listeners?  And what is the song “Saltine” all about, besides crackers?

What feelings do I hope to inspire? That's a big question. I'd say on this album I was really just looking back at my own childhood.  I tried to capture feelings of innocence, naivete, and imagination that I miss from when I was a kid. In terms of inspiring those feelings in others, I'm not sure it does that. I have had a few people tell me it brings back memories from their past as well - makes them think about when they were a kid.  That's very cool to hear.  I don't expect it to do that for everyone that listens to it. Honestly, I don't expect it to resonate at all with some people. It's a pretty personal album and the musical direction is really different than my music in the past. That's bound to throw some people off.

Well, "Saltine" is mainly about the crackers. I just couldn't get through childhood without them. I'd hide them under my pillow, in my shoes, on top of my book shelves - sneak one every time I was feeling down.. OK - not true. The song "Saltine" is about exactly what I just mentioned above. It's real moments from my childhood, things that meant a lot to me but probably wouldn't mean a lot to other people if they hear about it from the outside. In the song, I try to hit on surface aspects (i.e. a talk I had in the car with my dad) and then talk about how much was going on underneath it all (i.e. how much we had to cope with when my mom got breast cancer) and how hard it all was.


Richard:  Your friend and ours, the super-prolific Danny Joe Gibson, has made a lovely video for the song “Choices.” [watch the video here ].  Tell us a little about the video, which you compare to Malick’s Tree of  Life on your website.  How do you think it complements or enhances the feel of the song?

I think Danny's video completely complements the feel of the song. When I recorded the song, I tried to leave a lot of breathing room. There are quite a few times when it just drops to near silence.  I think Danny captures that same feeling with the video. The song and the video are both simple and aimed at catching beauty. I'd say a word to describe both could be 'airy' - they're lighthearted, but heavy at the same time. As you said, Danny is super-prolific. He's a blast to work with. It's funny to think that we've been collaborating in various ways for the past 13 or 14 years (he's made billions of concert posters for my old band).

Chip:  Do you play many shows these days?  And is it hard to get annoying scenesters to shut the hell up and listen to such quiet, fragile songs like yours?

I actually don't play many shows. Annoying scenesters have kind of scared me off the stage for good. Honestly, the reason I stopped was two-fold. First, I almost always play solo and that doesn't allow for much in terms of instrumentation. I would always end up playing an acoustic set (boring!) or a bunch of songs with my computer playing back-tracks while I played along (cheesy! karaoke!). I do miss playing with a full band, but I'd never be able to put the time into organizing practice sessions, etc. Sometimes, I'll get a band together if I get asked to play bigger shows.  I played with the Billions at last year's Middle of the Map Fest and I also had a full band play with me at a big event at JCCC a year or two ago. That's fun, but it doesn't happen often. The second reason I stopped playing out so much was because I started to realize that spending an evening away from my family AND losing money (I usually spend more on food/drinks than I get paid to play) wasn't quite worth it anymore. I value my family time too much to give it up so easily.


Richard:   As a veteran of the Lawrence scene for quiet awhile now, I remember The Billions-era of LFK . Do you still collaborate musically with your brother?  Also, I see that he’s involved in designing the artwork for the kick-ass compact-disc case for the new album.  Tell us about that?
I do still collaborate with Dan quite a bit. He, my dad, and my friend Josh Atkinson are my biggest sound boards when it comes to asking for feedback on music I'm working on. I actually just produced an album for my brother called Not Alone (you can download it free here). He's moved into doing artwork full-time with a cool ad agency in Topeka called JhP, so his music has kind of taken the back seat for the past five or six years. It's great to see him coming up with new music again. It was a total blast to record Not Alone with him. It's amazing to see how much we've grown up since our Billions days (or, on the other hand, it's amazing to see how selfish and immature we were when we were doing the Billions ..??). We'd always fight about the smallest things in the Billions.  It was always a control issue. It really got on the other guys' nerves as well. We still get called out for having 'Billen tendencies' to take control of everything and boss people around - ha! Anyway, with Dan's new album, I think we were both totally flexible and were more focused in the process of working together.

We also got to collaborate a lot on the artwork/design for my new album. He and my dad did most of the work .  I just sat back and said 'approve' or 'hate it' when they'd show me stuff (as you can tell, it was usually served to me upon a silver platter - I'm kind of the King Curtis of my family). What we ended up with for the case design is really awesome.  It has die-cut lettering on the front and it folds out into a little stand that I was hoping all my friends would end up putting on display in their cubicles across the country (yes, all my friends work in cubicles). I've been seeing a lot of friends taking pictures of the album and posting them on Facebook.  One was even adorned with some Toy Story action figures. I think my plan is working!

Richard:  It's an awesome CD case.  I turned mine into a sweet little house to shelter a PBR. Check it out: 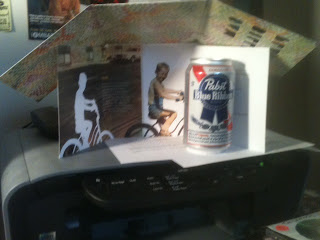 Chip:  Didn’t you used to live in some sort of “compound” outside of Lawrence?  Can you leave us with a strange tale to entertain our older readers who always complain that Lawrence is not as weird as it used to be.

We've got a lot of stories from our old compound days (although we never called it a compound - to us, it was 'home'). We lived right off of Highway 40 over by the Christmas tree farm - right around where that rapper Clackk was found killed. Sometimes we would have a bunch of friends over and set up a projector with a huge sound system and show horror movies on a big screen we'd hang over our van. We also had a five foot bull snake crawl up into our van engine one time right before we were about to drive to a show in Missouri. We finally got it out of the van engine, but then it crawled up into Jerry's engine . It took us another 30-45 minutes to get it out and when we finally did, we chopped it's head off (we couldn't let it crawl back into another car engine while we were gone!). Nature got us back for that one though - we had a few cats out there at the farmhouse and on MULTIPLE occasions, a cat would go missing for a while, we'd start to smell something rank, then we'd look up in a tree and see the cat's body, de-gutted, hanging from the top branches. At first we FREAKED because we thought the farmhouse was haunted. Then we realized that some old owl was hanging around our house, just waiting for our cats to come outside so it could eat them. In terms of 'band stuff' related to the farmhouse, there isn't much to share.  We had a hot-dog eating contest out there once (a birthday request from our drummer, Ken Komiya - it was around the height of Kobayashi's legendary hot-dog-eating performances).   I guess that was strange. 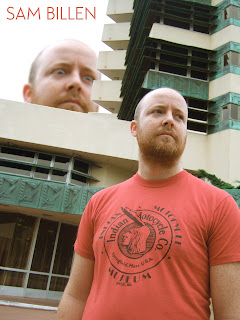 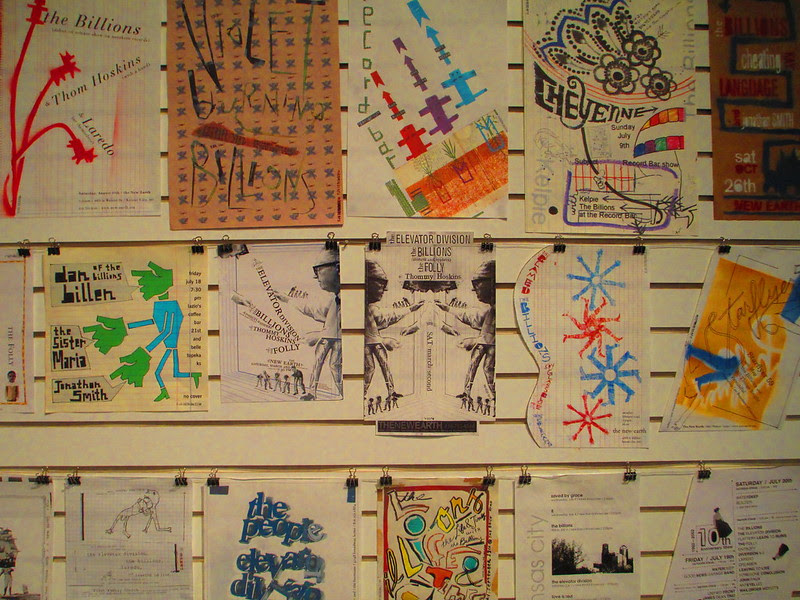 Sometimes people don't believe me when I tell them about how much you can earn taking paid surveys from home...

So I show them a video of myself actually getting paid over $500 for doing paid surveys.