If you're like us, you enjoy ethereal vocals delivered by a woman that also knows how to rock an autoharp, so you'll want to be on the scene at the Jackpot this Friday (Oct. 19) for Minneapolis's Jenny Dalton.  She's opening for Daymoths, fellow Minnesotans who seem to make regular stops in LFK these days, probably because local scenesters have fallen in love with their delightful homemade soaps (reread our Daymoths interview over here ).

We were pleased to chat with Jenny about the pleasures of the autoharp, mythical water-beings known as "Rusalka," and a scary tour trek to an FLDS compound.

Jenny:  What the hell IS a zither? My autoharp is a small, hug-able instrument with 36 strings that are a pain in the ass to tune. My main instrument is piano/keyboard, and I've always wanted to play a 12-string guitar but it's too hard for me to learn. On the autoharp, I just press a button and it makes a chord for me...and with a lot more strings, so it sounds even prettier.

Richard:  I saw one press blurb that listed your influences as “Albert Camus, mermaids, Twin Peaks and the Morton Salt Girl.”  And I was immediately intrigued!  Can you list four more influences that inform your current work, and please make them equally unexpected or odd.

Chip:  Your concept album Rusalka is about some sort of water-beings, right?  Tell us about the concept behind the album.  Also, are these things real and should I be scared of them?

Jenny:  You should be afraid of them, but I don't think they really exist. They're like evil mermaids that are beautiful and flirty but lethal. Like sirens. It comes from Slavic folklore, and I found out about them while researching the water concept of the album. I felt like water was an element that ran through the songs: it has the ability to be gentle or dramatic, playful and severe. I felt like a Rusalka was a creature that captures those dichotomies.


Richard:  I watched the “Cadence vs. Hugo Varvoglis” video and I’m simultaneously hypnotized and baffled.  Tell us what’s going on there.

Jenny:  Justin Staggs has done tons of amazing music videos, and I was really fortunate when he approached me wanting to make a video for me. I was just getting the remixes gathered and ready to release, so we worked with that song. He showed me a style sheet of what he wanted to do for the video - it wasn't a story so much as a mood. Like bringing a surreal, dark dream to video. I had very little input myself, and I'm glad it worked out that way because he had free reign with his vision for the whole video. I love the way it turned out.

Check out the video:


Chip:  You’ll be playing with Daymoths at the Jackpot, and they seem like very cool folks.  Can you tell us a quirky tour story?  Also, do Daymoths give you free samples of their homemade soaps?

Jenny:  I think the quirkiest stories are yet to come as I travel with the Daymoths in their RV (and insist that they give me their homemade soap). But I was on tour this summer, and my adventurous drummer took us on a "little detour" to drive by an FLDS compound (he finds this stuff very interesting) that ended up being a three-hour drive on a gravel road through Wyoming with no signs of life anywhere. And no phone reception. We were aiming for a town called Dewey where we could get directions and hopefully find a paved road to drive on, but Dewey consisted of a few buildings that were long abandoned. I felt like I was in "Texas Chainsaw" and had to coach myself not to freak out. We eventually found civilization, and I was never so happy to see golden arches.

Richard:  Leave our readers with a few sentences that will persuade them that the Jackpot gig is an absolute must-attend event.

Jenny:  I am persuading you that the Jackpot show on Friday Oct 19th is an absolute must-attend event! I will sing pretty songs at you, and we will smell really good despite having traveled in an RV because the Daymoths also make soap!

1) Jenny giving you a hypnotic look! 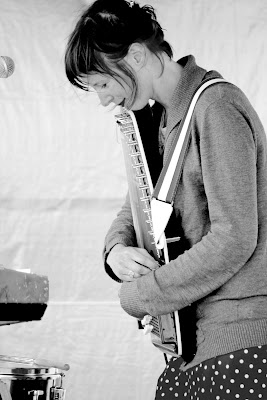