Readers, we're too lazy today to put together a full slate of weekend picks but here are a few for tonight.

It's certainly clear that "The New Bullshit" opening at Invisible Hand and BARRR's "New Wood" opening at Frank's are must-attend events for Final Fridays.  And it's recently come to our attention that "Wayne Propst and Associates" will engage in a "Sacrificial Cow Raising" at 7:18 pm (according to LJ-World listing) at the Seed Co. studios. If you know what that means, you're smarter than us.  But you certainly don't want to miss it!  And check out our friend Karen's Larryville Artists blog for a more complete guide to tonight's festivities (and make sure to wish her a happy birthday if you spot her on the scene this eve!).

Our friends at Liberty Hall are bringing on more and more cool screenings these days (but where's October's Film Church, dudes?).   Tonight you can catch First Blood on the big-screen at 10:00 .  We hear they'll be serving "Rambo shots," composed of half Jager, half Rumple, which means the notorious and mysterious Rumple-loving serial retweeter known as @LarryfuckingKS will almost certainly be in attendance.

The Hips and Hospital Ships are playing early sets at Love Garden to celebrate their new 7" on Replay Records.  Insert some sort of 7" boner joke here.

Junior Brown's playing an early set at the Bottleneck for the honkytonk crowd.  Look at that guit-steel: 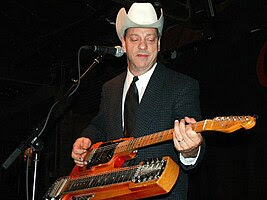 Chip:  "He's a virtuoso, to be sure, but his finest performance remains his voice-over work as The Balladeer in the Dukes of Hazzard remake."

And Quiet Corral is at the Granada tonight.  End your evening with some soothing four-part harmonies.  We interviewed the band's Garrett yesterday.  Check it out here .