Straight Outta Hillsdale (Kansas): A New Interview With Mr. And The Mrs! "Our music is STD-free and doesn't expect you to call the next day."


On Thursday night, very late, after all the annoying little high-school zombies in the Zombie Walk have shuffled off to bed, a garage-rock duo from Hillsdale, Kansas will roll into the Replay and fry what's left of your brains that the zombies haven't already chomped.  They're called Mr. and the Mrs, and we spoke with the Mr. (whose name is Ben) about driving songs, O-faces, and the best place to get your ass kicked in Hillsdale.

Head over here to Soundcloud, click on "Where Ever You Go," and surely you'll agree that this is the exact kind of grit you need to wrap up your Thursday.  Also on the bill:  Sneaky Creeps and Stiff Knights (Chip:  "I hope Stiff Knights appear dressed in suits of armour and with boners!").

Chip:  Let’s start with the band name:  are you two really a married couple or are you pulling some kind of reverse-White Stripes business in which you claim to be married but are really brother and sister?

Ben:  We thought being brother and sister meant you were married, Chip!  Yes, we are. And there is no connection to the White Stripes besides a respect and love for their music (but who doesn't?) and that we are a man and woman.

Richard:  I love the “Kansas Outlaw” tune with its lines about “Johnny Law” and “straddling my three-speed.”  I don’t tend to hear a lot of good old-fashioned driving songs coming out of the garage-rock culture.  Is that based out of rockabilly influences?

Ben:  I was thinking the same thing. What probably happened were high gas prices and the Prius. But someone's got to still drive these cool cars somewhere, like those Greasearama guys. And we are influenced by the likes of the Cramps, Stray Cats, The Spook Lights, and ZZ Top among numerous other great rockabilly or psychobilly acts.

Chip:  The title “Peanut Butter Quicksand Love” gives me a boner.  Is there a dirty story behind this tune?

Ben:  True story: if you put peanut butter on your man-junk or woman-junk, it will attract most any mammal.

Ben:  But the song is about a love that's just lust, that neither person wants to admit with the result being lies and feelings of betrayal mixed with a burning desire for one another.

Richard:  I see that you’re from Hillsdale, Kansas.  Is there a music scene in Hillsdale?  Or at least a few dive bars where we might hear some outlaw country and get in a scuffle?

Ben:  There is a cover band scene, but we are going to change that with a few house parties. There is one tavern I've been kicked out of twice: once with my acoustic guitar and once as Mr and the Mrs.  They said,  If you can't play any David Allen Coe then leave.  As for scuffles, I think that's how they stay in business:  Friday night fights and Saturday night sorrys.

Chip:  Your "About" page on Facebook lists your skills as “guitar and o-face.”  Do you tend to achieve orgasm during performances?  Does the audience?

Ben:  That's exactly what's going on at our shows.  We do the nasty with our instrumental abuse and it produces musical orgasms which in turn makes the audience orgasm.  Not to worry: our music is STD-free and doesn't expect you to call the next day.

Richard:  Looks like your Thursday gig at the Replay is the same night as the Lawrence Zombie Walk.  Will you be dressed as zombies?  Also, convince our readers in a few sentences why they absolutely MUST witness your show.

Ben:  Yes, we will be made up as zombies.  I remember seeing those people for the first time last year kicking boxes around by the trashcan in the alley behind the replay. Scared the shit out of me for a second! And as for why you should come see the show, who doesnt like an extremly loud orgasm while drinking cheap beer. Just let the music finish: it will get off when its done.

Here's the Replay flyer and a flyer for an upcoming Barnyard Beer show as well: 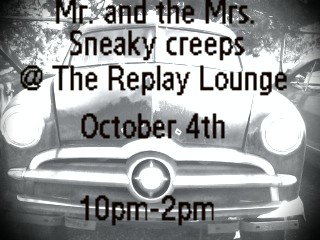 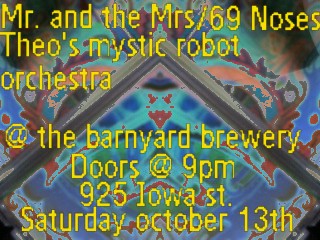