Sunday Scenester Picks, From Heavy to Twee: Police Teeth at Replay and Tilly and the Wall at Jackpot / Photo of the Day: Sad Hawks


For those of you looking to extend your weekend, the Replay offers up a raucous Sunday slate featuring LFK's Muscle Worship and Jabberjosh along with Seattle's Police Teeth.

Aside from a cool band name, what else can Police Teeth offer?  A quick glance at their Bandcamp reveals equally great song titles such as "Gifts, Knives, Adult Movies" and "Where's My Fucking Hug?" and "Life is Precious and God and the Bible."

Readers, that last one is a Mr. Show reference!  We're sold.

At the Jackpot, Omaha's Tilly and the Wall take the stage.

Chip: "Isn't that the tapdancing band?"

That's right, Chip, but Pitchfork says it best in their review of the band's new Heavy Mood:

"Like a glittery, tap-dancing unicorn, Tilly and the Wall have spent the better part of a decade giving meaning to the phrase 'twee as fuck.' "

It's hard to see how such a terrific statement could emerge from a tepid 5.9 review? We say: embrace the twee!

The opener, Nicky Da B, is (according to his website ) "at the forefront of the next generation of New Orleans Bounce Rappers."  LFK is sadly lacking in New Orleans Bounce gigs, so watch Treme on HBO tonight and head to this show for a night of  "Nawlins' culture (followed by twee Nebrasan tap-dancing).

Tilly and the Wall photo via this site: 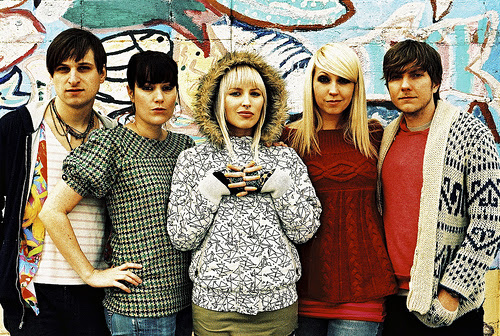 Our photo of the day comes from this LJ-World gallery.  It's the sad 'Hawks leaving the field after last night's 52-7 drubbing in OU.  It seems unlikely that KU's Memorial Stadium will feature a similar championship-festooned walkway anytime soon (or ever).   Now let's just hope the campus newspaper can find a way to paint last night's massacre in a positive light, since Charlie doesn't like when the UDK is critical.