If you're like us (old), you probably have fond memories of William Elliott Whitmore soothing loud crowds at Replay punk shows with nothing but a banjo.  These days he's traveling in a decidedly less-rowdy, more folk-oriented scene and getting fine reviews (7.5) from the likes of Pitchfork which, as we know, isn't always kind to such earnest types:

"...miraculously, nothing at all here reeks of bullshit," say the Pitchfork scribes of his 2011 album Field Songs (full review here ).

So there you have it, folks.  Come enjoy a bullshit-free evening at the Granada!  The show starts early, at 8:30, because the latter part of the evening is devoted to a Bassnectar after-party (which may feature at least a modicum of bullshit, given the young, druggie crowd that enjoys Bassnectar).

Opening for Whitmore is Oklahoma's Samantha Crain, who has a new tune which you can download for free from Rolling Stone right over here .


We love every story that involves Brownback and art or, even better, Brownback-related art, and there's a good one right now out of Top City.

We first saw Dave Loewenstein's painting of a burning Brownback right here in LFK, but of late it's been hanging at Topeka's Blue Planet Cafe.  However, it was recently removed to keep from offending an employee of that cafe...Brownback's daughter!

The building owner says: “Liz [Brownback] is a valued employee and friend to us and I (we) felt strongly against subjecting her to having to look at a picture of her father burning at her place of employment.”

Read the full LJ-World piece over here .  As you might expect, the talkback is solid gold. Here's our favorite comment, which is directed at Loewenstein and also contains an astute analysis of the work:

"The image is actually more interesting as a pastiche of Roy Lichtenstein's tearful blondes than it is as political commentary. Besides, it's pure fantasy to think that Brownback would cry tears of remorse for sending Kansas to perdition. Haven't you been paying attention Dave?"

And here's the piece in question: 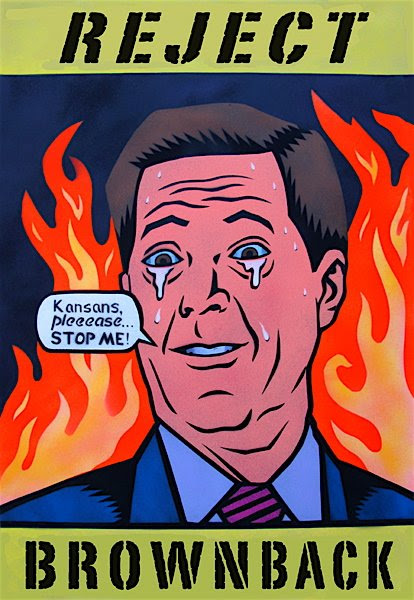 Last night's Zombie Walk was full of too many annoying kids who didn't put enough time into their zombie-fication and talked on their cellphones while shuffling, but there were certainly moments of inspiration to be found in the proceedings.  We feel that this zombie truly captures the spirit of LFK: 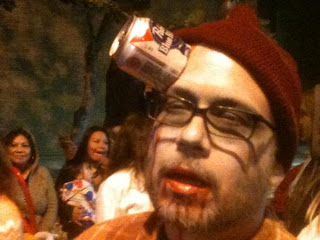