A Preview of Spooky October Events (Including the Lawrence Zombie Walk)


Readers, it's October 1, which means that it's already time for LFK's onslaught of spooky/freaky events leading up to Halloween.

One of the biggest of those events is this Thursday,  Oct. 4, as the Lawrence Zombie Walk clogs the streets (it was 850 strong last year, if you believe the stats) with brain-munching ghouls of all shapes and sizes...but mostly of the annoying high-school size.  But don't let the youngsters scare you away, scenesters:  just push them out of the way and do your zombie-thing.

Check out the Lawrence Zombie Walk blog over here for important statements such as this:

"...the Zombie Walk is crowded and confusing."

Visit the FB event page here . And don't forget to stop by the LPL's "zombie clinic" on Thursday afternoon if you need help getting zombie-fied or need "tutorials on how to zombie shuffle."  Details here

Over at at our friend Nick's Rock Star Journalist blog, catch his Halloween marathon series of kick-ass horror reviews which starts today with the recent, very-meta, Cabin in the Woods.  We hear he's tackling the severely under-seen gem Chopping Mall this month, a delightfully bonkers film about killer security robots which made a recent appearance at Horror Remix on a night we (ignorantly) skipped.

Wonder Fair's 100 Ghost Stories event kicked off on Final Friday, and of course we stopped by to wind our way down a dark hallway lined with tombstones featuring funny epitaphs to find ourselves at a bar mixing Ectoplasm drinks, located  inside a Haunted Video Store, which looked like this: 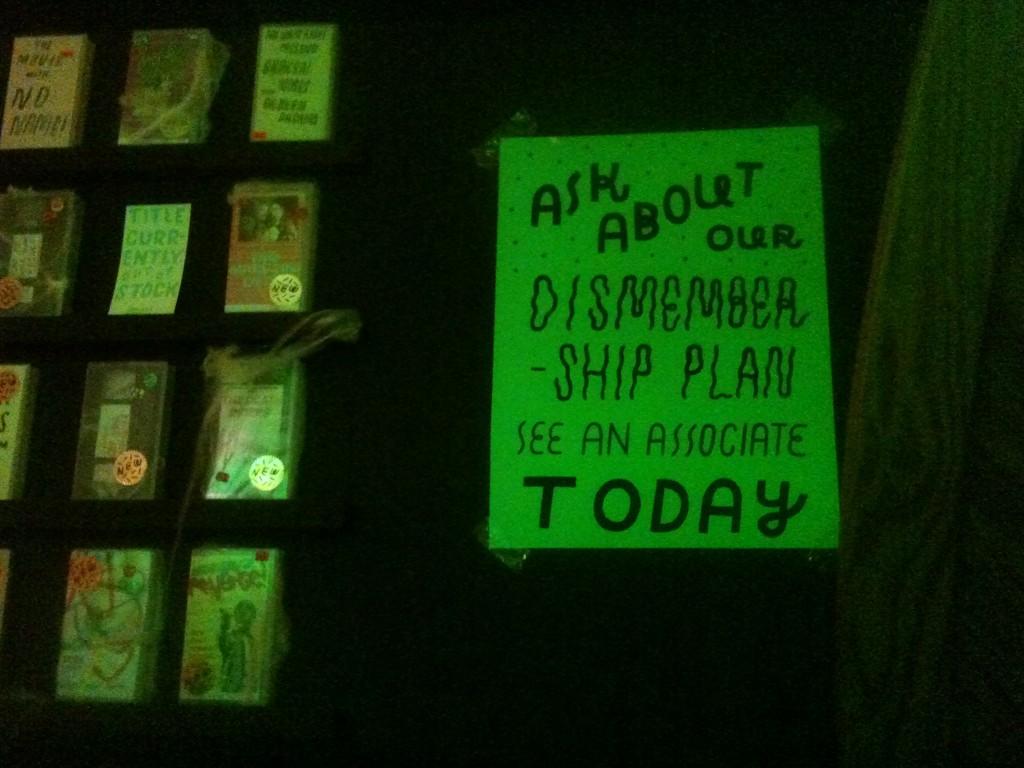 Their next major event of  the month is a ghost story reading in the Wonder Fair gallery on Oct. 4, followed later in the month (Oct 18) by a screening of Ghoul School and The Burbs at Liberty Hall.   Get some Ghoul School info over here .  We're sold on the tagline alone:  "This Summer.  Get Flunked.  Straight to Hell!"

And Liberty Hall is also planning a terrific Halloween event for early in the evening (before you hit the Replay).  Check it out:

What else is spooky this month?
Posted by Nog at 2:30 PM