New Interview: Til Willis Joins Us For a "Dark After-Hours Conversation About the State of Things"


We're not sure if all you apathetic scenesters have realized it, but it's election season.   And we've got the perfect local record for you as the tension builds.  Til Willis and Erratic Cowboy's Land of Sawdust and Spangles provides a trenchant take on these troubled times.  Plus, we feel like it'll make for a great evening of (thoughtful) beer-swilling at the Jackpot this Saturday night (Oct 20).  Also on the bill is the awesomely named Comanche the Horse as well as Travel Guide Music.

Listen to the new album on Soundcloud over here and check out Til Willis and Erratic Cowboy on FB over here, {where we just learned that you can apparently catch a little solo acoustic action from Til at 5:30 tomorrow at Watson Library: pay attention, young scholars!).

We caught up with Til for a chat about politics, two-stepping, drunken rowdiness, and the smell of teenage girls.  Enjoy!


Richard:  Before we get to specifics about the new album, let’s start with a classic music-criticism question about your sound. Fill in the blanks:  “Til Willis and Erratic Cowboy sounds like _________  meets _________ meets ____________. “ And can you please fill in one of those blanks with something suitably obscure that will impress our discerning scenester readers.

Til:  Til Willis and Erratic Cowboy sound like Neil Young and Crazy Horse meets The Clash meets Sleepy LaBeef at a concert by Jandek's sister's band, Dicdek.


Richard:  As a local progressive, I think LFK has been in dire need of a good old-fashioned political concept album, especially with the election only a few weeks away.  You’ve described Land of Sawdust and Spangles as a “dark after-hours conversation about the state of things.”  So what’s your take on the state of things right now?  Just how fucked up are we, as a country, and how does the album speak to our current political climate?

Til:  I think the country is in a fairly dark place. We've left too many Bankers, Lawyers, and Thieves in charge for too long. Oh wait, they're kinda the same thing. Like a lot of people, I'm disappointed that we haven't seen more change, but I'm not naive enough to have thought it would happen over night. I think some ground work has been laid toward better things coming. I know who is not getting my vote. We have too many money changers in the temple already. It's time to get back to the belief that we're only as strong as our weakest link. The themes that creep up in the album are ones of unease in what might happen, and hope that we'll get past pitfalls, but that could be any time I suppose, not just election time. Everything is just heightened when we gear up to an election, mainly because it's big business, and we're just bombarded with sales ads for candidates. Here's an idea: what if politicians concentrated on working for the people instead of getting reelected. Then two days before election we all get a certified email or letter from each candidate outlining what they want to do. The night before election both go on television (one of our more lasting commodities) and verbally lay out their platform. The main theme of the album is fight on, fight on, your time ain't long. Well, that rambled on...

Chip:  There’s a song on the album called “The Smell of Teenage Girls.” I could make at least eleven very inappropriate jokes about that title right now, but I’ll refrain. Please tell us what that song is all about.


Til:  It's about being too interested in the wrong things, and putting off the important ones. That's not to say I don't want to hear your dirty jokes.

Richard:   There’s some nice songwriting on the album.  I particularly like the opening of “Division Here Among Us” :  “Pipe down, boys, the president’s about to speak / Most of the whiskey’s gone.”  What’s your personal favorite line and why?

Til:  Well thank you! Hhmm....maybe "oh, oh Thunder Road." Oh damn, that's Springsteen. How about, "buzzards of the sea throw back pearls of eternity / like Falstaff's apostle laughing with glee" from "Built Of Man."Falstaff being the fool.  I sometimes feel like the fools are the more forward thinking.  As for buzzards of the sea, we're all surrounded by buzzards everyday. And there you go: you've made me break a cardinal law of parenting and pick a favorite! Ask me again tomorrow and I'll tell you something different. My drummer likes the opening of Uniform: "So many delicate fears / Runs through an election year /casting long shadows." Avoid those shadows, people! We're built of stronger stuff than we know.

Chip:  I feel like I could do a nice drunken two-step to the song “Day After Election,” but at the same time I feel like I should shut up and pay attention to the lyrics.   When you’re playing these songs live at the Jackpot on the 20th, would you prefer a studious, attentive audience or is it okay for me to get a little drunk and rowdy?

Til:  Oh, for fuck's sake, get drunk and rowdy, it's only rock'n'roll! That's what live shows are for. Contemplation of lyrics is best done at home. I've seen Bob Dylan seven times, and while I love it when he changes lyrics live, I'm going to watch the man and his band let one fly. But, I'm glad you wanna  drunk two-step to that song. I was drunk when we recorded Last Dollar. Neil Young once said, if you don't let your music get as liquid as you are, you're not telling the truth.


Richard:   Imagine that Pitchfork wrote a typically snarky review of the album.  How might they describe Til Willis and Erratic Cowboy, how would they feel about the political content, and what rating might they bestow?


Til:  Shit, I'm sure I don't know. I couldn't tell you the last time I held a copy of Pitchfork. I'm sure they have their criteria. It's my job to produce the music. I give the album 5 out of 5, but I'm trapped in the painting. However, I did send the album to Pitchfork and they sent me back a box of dildos...not sure what that's supposed to mean.


Chip:    You’re playing at the Jackpot with a group that has one of my favorite current local band names:  Comanche the Horse.  I haven’t actually seen or heard them yet, but do you know if the band contains an actual horse?  Also, leave us with a few sentences that will convince our readers that they absolutely MUST attend the Jackpot show.

Til:   We did a show with Comanche The Horse a few weeks ago, I wish I could say that the guitar player did the whole show from horseback, but alas that's not the case. If you're looking for animals in bands, I've been told I'm an ass...

Come down to the Jackpot on the 20th for some rough, raw, lyric-driven rock made by three guys who believe in the power and the swing of rock'n'roll. We'd love to have a drink with you, and entertain you for a bit. Hell, as far as I'm concerned, you can take your shoes off, get comfy, or get up tight (in the 20's Jazz terminology) and dance your ass off. You can also grab a free download of our single Freshly 21 at http://soundcloud.com/til-willis/freshly-21

Hope to see you there!


Til Willis and Erratic Cowboy: 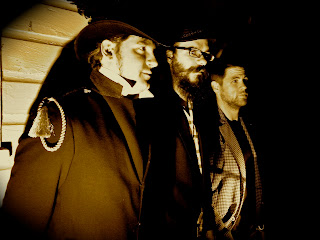