Compton Gets a Resort Hotel, Bananasuit Goes to the Bone Dance, and "Pass the Hat" Returns to the Percolator

We'd recommend you head to the LJ-World to check out the talkback.

Our vote for most nonsensical comment so far goes to FalseHopeNoChange, who says:

"Put in an "Arts and Crafts" room to allow the 'emotionally distressed "bitter clinger" Genies to 'feel' better. Their complex, yet nuanced 'emotional' state of mind is crucial to keep them from "clustering" in the streets with "candlelight vigils."

"Silly rabbit, downtown is being transformed into an upscale Aggieville, that is all it is, why do you think the developers who have invested so much of their money in the college sports scene are buying it up? It will be all bar scene and high dollar restaurants. Forget about groceries and a dime store."

There's not a grocery or "dime store" even now, however.

And ClassClown offers a bit of aid to those seeking to block the development:

"I think I spotted an endangered lizard on that lot. And a prayer/medicine wheel. There! That should keep the building from being built for at least the next 20 years."

We'll see you at the groundbreaking ceremony!


Sure, we survived an interview with Bone Dance, but there was NO WAY we were going to risk life and limb to see them at the Bottleneck.  So we sent LFK's resident metalhead / third-wave feminist Bananasuit to experience the festivities.  Here's her (frightening) report:

Scenesters, if you're missing Metal Monday at the Bottleneck, you're missing out -- hard.  They've got local bands that will melt your face, plus $3 microbrews and $2 Black Tooth Grins. Last night Bone Dance joined the lineup from Boise, Idaho, and -- intrigued by Chip and Nog's interview (in which lead singer Bryce admitted "we haven't shoved a fish up anybody yet") -- I set out with my iPhone, my copy of 2666, and prepared to witness some salmon.


I have no idea who opened, but they were adorable. The lead vocalist, who wore cutoff army cargo pants (topical!), passed the time by cracking awkward jokes about his sweaty balls and promising that he wouldn't bite anyone who ventured closer to the stage.  The backup guy sang one awesome song with those growly, scratchy, hardcore vocals, but I was distracted by his adorable teddy bear face. And I think he is a library patron.


This Is My Condition played next, with an intimate percussion setup in the middle of the bar.  I'd never seen him play before, and holy shit: the most lyrical, beautiful and strange instrumentation. The crowd hovered around to watch him play guitar frets like snare drums and pick up breaking equipment with one hand while waving around a tiny feedback device with the other. Sweat dripped down his face, and he smelled like a man. The icing on the cake? He closed his set with a Country Western cover.  Go hug this guy.


By the time Bone Dance took the stage, expectations were high. Sure enough, Bryce immediately jumped into the crowd, breaking the "Fourth Wall" and daring the audience to interact.  So I planted myself front and center and took the opportunity during a rare lull between aural stabbings to tell him how much I liked his moustache.


Apparently this was not the type of audience participation Bryce had in mind. I say this because he reacted by tipping his head back and hacking up the most extreme loogie I've seen in my life so far, and then letting it land right on his upper lip hair.  "Touch it," he said.  Instead I ran away, terrified, to the bar and let bartender Rob pour me a shot of Rumple.


At the end of the night, this much nicer moustached man allowed me to drunkenly wax poetic about moustaches and snap this grainy shot: 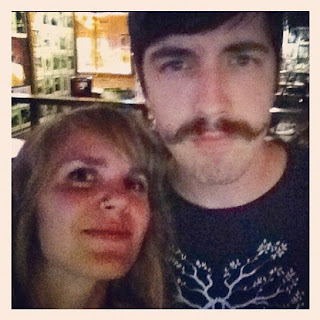 All in all, a total success.  See you next week at Metal Monday!

Speaking of This is my Condition, the man behind the madness, Mr. Craig "He smelled like a man" Comstock has a whole slew of "Pass the hat" shows coming up at the Percolator.

We'll just present the info to you below in Craig's own words, straight from the press release!  Sure, it's going to be blazing hot out there, but don't be a pussy.  Check out some of these shows.

Saturday June 30th 5pm potluck 7pm food
Witch & Hare from Kansas City... these guys are just drop-dead awesome. Loved them for years.Sneaky Creeps - this is Andrew Erdrich of Kansas City Speakeasy fame as well as many other projects in KC.
We'll likely get another band from Lawrence to play this show. To be announced!

[Just announced:  that band will be the motherfucking Leotards!).

Tuesday July 3rd 5pm potluck 7pm food
3 Moons from Portland Oregon. Sort of psych folk blues. This is Jeffrey Kologe, of late from Kansas City and in such famous (in my mind) bands as The Sperm and I Don't Do Gentlemen to say nothing of Miscellaneous Insect Collective.
Chad Bryan from the Ants will perform solo.
TIMC will open up the evening promptly at 7pm. Woo hoo!

Your Unknown Hipster here was quietly minding her own bizniss at Z's yesterday when 3 of the Compton development team came to drink Naked Juice and scheme about downtown. Now, don't get me wrong; I'm actually indifferent about the whole thing. I wish that someone other than Compton would build some shit so he won't control the whole town, but I'm all for gentrifying, and having some (literally) upward construction (rather than outward) in Lawrence's downtown is smart. I know that people say they want to preserve shit, but I swear that if it were a hippie commune that wanted to build a (green) skyscraper on the same plot, there would have been a spontaneous parade of support on Mass street for it. But it was still pretty depressing to hear the cronies scheme at Z's. How disconnected from the community do you have to be not to realize that the clientele at Z's is probably not really minding their business and is really anti-Compton. I left a bit after they came in; I hope they left with all their limbs.

In other news: I really should file that Little Rachel and the Rhythymbusters show report, shouldn't I? Sorry, Nog!

How do you know they were Compton people? What was the scheming? If you are indifferent, what is hip is to not produce discourse. Do not file any more reports.

Hey now, The Unknown Hipster is free to share any and all rants here (even though we often disagree with his or her anti-LFK sentiments!).