Our (Shirtless) Interview with Cloud Dog: "We usually paint at the show space, so you can always get painted there."


Readers, if you're still running wild on good vibes (and various drugs) after the Liberty Hall 100th Anniversary Block Party and the second night of the Flaming Lips at Liberty, make sure to head to the Bottleneck for the Lips' afterparty featuring Ashes to Immortality and Cloud Dog.

We chatted with Cloud Dog's Jim Dandy, Brett, and Derek about what to expect from tonight's gig, the importance of being shirtless and painted-up at their shows, the delightful nature of Bollywood musicals, and their upcoming "360 Psychedelic Panoramic Sound Immersion Dance Experience."

They are slated to hit the stage at the Bottleneck at 11:00 tonight.


Chip:  Our concert memories are fuzzy from too much PBR, but we’re pretty sure the first time we saw Cloud Dog was at a Farmer’s Ball at the Bottleneck.   We remember the performance as being intense and primal and, frankly, we were a little bit scared!  How would you describe the Cloud Dog sound and the Cloud Dog experience to someone who may not have witnessed it before?

Jim: ...And we present a very interesting mix of electronics and live percussion. I would assume that our frantic drumming and face and body paint is what caused you to see a more "intense and primal" side. I guess a lot of people could see it that way. There is a lot of human energy being used, coming from us playing and from everyone out there gettin down...

Jim: ...Our set up consists of dual samplers pumping out swirling synths, danceable beats, catchy melodies, and of course the drums.

Derek: I agree, there is a lot released back and forth from us to our visitors and vice versa.


Richard:  You’ll be playing the Flaming Lips’ after-party at the Bottleneck tonight.  Are there any special plans for this gig, such as Lips’ covers, stuffed animal costumes, confetti cannons, or maybe rolling around the crowd on a hamster ball?

Derek: Nothing quite as epic as a hamster ball.  There might be some rolling around though. Last show at the Bottleneck we ran projections and set up a separate stage for Brett and I to play on in the middle of the dance floor. It also freed up room for people to dance on stage.

Brett: Mass. Street drum circle prior to the show

Jim: We will have plenty of paint and glow sticks. The drumming and dancing will ensue. Our show will begin right at 11:00pm.

Brett: Bring your own crystals.

Derek: It's all about the mindset

Richard:  The song “Temple Step” and its video certainly reveal a Bollywood influence.  Are you guys fans of Bollywood musicals, and does a Bollywood-style dance party tend to break out when you play that tune?

Jim: We are interested in exploring musical genres from everywhere. For our latest album, Realms, I was heavily influenced by eastern Indian vocal structures. I am really more interested in creating layers and textures, soundscaping, rather than adhering to a specific genre. I am a fan of Bollywood for sure but, just like a mood, your music taste can change instantaneously. I am currently intrigued by Tropicalia and Samba.

Derek: Really, all sorts of dance styles break out at our shows, even ballet.

Chip:  You guys are often shirtless and painted-up at the shows.  Would you recommend that I do the same before coming to the gigs?  And do the ladies ever get shirtless at your gigs when they catch that Tribal Acid groove?

Jim: To your first question, Yes. We actually give discounts at the door if you are not wearing a shirt.

Derek: We usually paint at the show space so you can always get painted there.

Jim: I did play an outdoor show in Omaha where the ladies got naked, danced, and were fire-breathing. Pretty wild night.

Richard:   We’re told that your July show at the Bottleneck will be a “360 experience” but we’re not sure exactly what that means, though our guess would be that the crowd surrounds you all sides.  Tell us about that upcoming gig and why it’s going to be special.

Jim: Well, we are always experimenting with different ideas to keep our shows interesting. My latest idea, the "360 Psychedelic Panoramic Sound Immersion Dance Experience" you heard about, really pertains to a multitude of sweeping, panning sounds flooding the listener from all sides rather than coming from the one stage direction. We will have several high volume speakers, including what is already in house, set up around the venue.

Brett: Sound will be shooting all around the room.  You will be able to really feel the music

Jim: These speakers will all be directed in a circle fashion to surround everyone who will be down in front of the stage. I will be manipulating samples and beats into independent speakers at different times. We have a whole lot more in store for this show, I can't really give it all away.  You just have to come and experience it yourself.

Derek: July 20th at The Bottleneck.

Chip:  You guys have a new album, Realms.  What else is on the horizon for 2012 in terms of music and touring, or do you believe that the Mayan apocalypse is imminent?

Brett: We are going on our first official tour together this year, at the end of September.

Jim: We are also playing HarvestFest this October. But before that, we are hoping to release a Realms Remix cassette with Whatever Forever. Creativity never sleeps. I thought I would be able to get a little break after Realms, but I can't stop thinking about where to go next.

Derek: I mean, Dick Clark dies the year the Mayan calendar ends!? What do you think?

Chip:  Seriously, though, is your name REALLY Jim Dandy?

Jim: Is your name REALLY Chip? 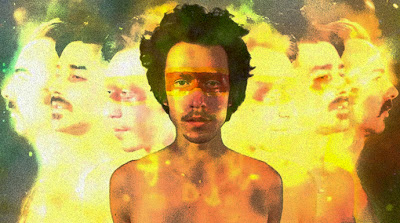