Readers, if you're like us, you probably had your entire Saturday planned around the Belmont Stakes and a series of drinking games based on I'll Have Another, today's top contender who everyone believed was poised to take the Triple Crown.  Sadly, I'll Have Another has been scratched from the race, but we encourage you to have another anyway, in his honor, perhaps across the river in No Law at the lovely new(ish) Gaslight Gardens.  The Gaslight's hosting some sort of Belmont Stakes celebration:  party starts at 4:00, race starts at 5:30, and a drink special called The Belmont Breeze is being offered.  Sounds like a plan.  Make sure to like the Gaslight Gardens on Facebook here .  Did you know you can rent bikes there ($20 bucks for 3 hours) and cruise around No Law?  (Chip: "It's easy to outrun hobos on a bike.").

And it's a big night for alt-bluegrass historians at the Bottleneck, with Split Lip Rayfield's Wayne Gottstine and Bad Livers' Danny Barnes teaming up to form...The Split Livers (get it??).   This show should be a stomping' good time.  They're joined by openers Olassa (reread our Olassa interview here) and the always rollicking Truckstop Honeymoon.

As for us, we're all partied out after last night's furious set of country blues with Reverend Peyton's Big Damn Band at the Granada.  Have you ever heard a louder 3-string cigar box guitar?  We seriously doubt it. 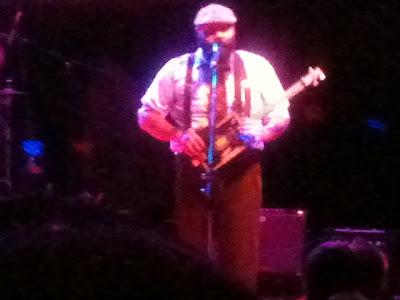 But why was there no opener on this evening?  Did they cancel?  Were they never booked?  And why didn't someone just go outside and pull Tyler Gregory off the street corner to play a few tunes? No one seemed to know.

nice posting.. thanks for sharing..