This week we turn our attention to Liberty Hall, just in time for their two-night 100th anniversary bash with the Flaming Lips on Thursday/Friday and a street bash on Friday.

Enjoy, and we'll see you at the Flaming Lips' freakshow.  Don't forget to offer us some bath salts if you've got any!


"I'm more than thrilled to talk about Liberty Hall this week for a few reasons. For one, the venue is celebrating an incredible birthday with a big party on Friday. But more importantly, my favorite show at Liberty Hall also happens to be my favorite show of all time in Lawrence. The night that Gogol Bordello played Liberty Hall on Halloween in 2007 was visually vibrant and so memorable that I'll hardly be able to let a week pass without thinking about it.


I have to preface this article by telling you about our long journey with Gogol Bordello. We discovered them in the early 2000's, and were pretty convinced that they would never tour the U.S. unless it involved New York or L.A. But suddenly, midway through that decade, they started touring every nook and cranny of the nation. We were super fans, and we were thrilled that they remembered us every time we showed up at one of their gigs. The first time we saw them was in Omaha, where we were two of SIX total people in attendance for that show. From then on we became more familiar with the band, seeing as how they toured not once, but at least TWICE a year in these parts. After every show, they took time to chat for hours on end with fans who stuck it out with them behind the venues they played.


They started out at small venues, but as their popularity rapidly grew across the nation it was finally time to move on to a bigger place in Lawrence. That's when they booked Liberty Hall, and to our surprise and extreme delight, they had booked the show on Halloween! That is my favorite of all holidays.


We saw various members of the band roaming downtown throughout the day, and were happy to see them mingling with fans everywhere. When we got to the venue, I (an avid Halloween enthusiast) was beyond excited to see the array of costumes that showed up at Liberty Hall. The balcony, which was generally reserved for folks who didn't feel like standing the entire night, was now home to people with more ELABORATE costumes that didn't leave much for movement. But out of all the costumes we saw that night, none were more memorable than Mario, Luigi, and Wario.


Sure, those aren't very creative costumes, but what made them so memorable was the fact that the venue was packed (probably sold out), so there was little room to move no matter where you stood. Seeing as how this was a show that brought out over-the-top thrashing, you had to make sure your spot was a good one. So Mario, Luigi, and Wario got shoved up onto the front of the stage (a little off to the right, if I remember correctly), and rocked out directly in everybody's line of vision. Imagine! Being a child of the 80's, seeing one of your favorite bands onstage, and there's Mario, Luigi, and Wario rocking out right there with them! It was an incredible sight.


Other high points from the show included stunning sound, an energetic live performance (complete with sassy dancer/backup singers), and not a single Debbie Downer in the crowd. Even the security guys and bouncers were wonderful! They loved the show just as much as we did, and were very helpful to even the thrashiest of fans.


Back in that day, I had a piss poor Flip video camera, but I always recorded every single show I attended. Here's a clip of the band debuting what would end up being one of their newer songs, "Wonderlust King." Watch the crowd jump SUPER high at about 1:14 in.

The band would end up coming back to Liberty Hall a couple of more times before booking most of their shows in Kansas City, and then finally just taking a little time off from touring the Midwest. During that time, they had highs and lows. Some members of the band got a little mouthy with their super fans, but would eventually make it up to them at later shows (this included private acoustic performances for the early birds and after parties that included plenty of mingling and apologizing for bad behavior the previous year).


But through all these highs and lows, fans of the band will remember that one epic night when they finally booked a bigger venue and let every crazy costumed Lawrencian in for the party. We left that night soaking in our own (and everyone else's) sweat, running into the cold Halloween air, our ears ringing from what was probably the third 20-minute encore.


Thank you, Liberty Hall, for providing a home to some of the most memorable shows of my life."


Here's a photo via www.ozufo.net .  Did you learn "the truth" during their recent UFO conference there?  We sure did. 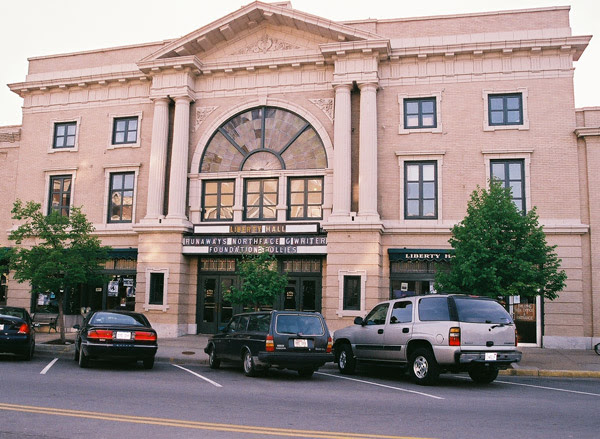