Our Big Damn Interview With Reverend Peyton's Big Damn Band: "I did tons of fishing on the Warped Tour."

Otherwise, this discussion is in keeping with some of our chats with bands who dig deep into the "old weird America" of early roots music.   The band has a recent Charley Patton tribute album called Peyton on Patton and a new album of original tunes coming in August called Between the Ditches (get a sample here via My Old Kentucky Blog).

In the meantime, you can catch the Rev and his Big Damn Band at the Granada this Friday!  Visit their official website here and enjoy our interview which covers the band's wild and unlikely stint on the Warped Tour, the delicious nature of fried 'taters, and the greatest murder ballads of all time.


Chip:  When I first heard your name, I assumed this damn band would big, as in containing a lot of members, like Lyle Lovett’s Large Band or that cult that calls themselves the Polyphonic Spree.  So how did your trio come up with the moniker of “Big Damn Band?”

Rev:  It is in reference to our huge sound!  I had a tendency to say "Big Damn" about things that were huge back in the day.  Seemed appropriate.

Richard: Tell us about “Peyton on Patton,”  your tribute to Charley Patton.  We hear that he’s your pick for the true “King of the Delta Blues.”  What makes him so special for you?

Rev:  Oh man...Charley was a generation before Robert Johnson.  He was the first real star of American Folk/Pop music.  If his recordings were just a little bit better he would be a household name.  You gotta remember that he was using outdated recording gear in 1929.  Those recordings are raw.

[Read a rave review of the album via No Depression and watch the Rev playing some Patton down home on the farm here ].

Chip:  It cracks me up to think about you guys and your washboards out on the Warped Tour a few years ago with all kinds of crusty punks, yet I imagine the reception was pretty good, since your band is so rowdy?  Can you tell us a hilarious story of debauchery about those days?

Rev:  We stuck out like a sore thumb, but we always do anyway.  You know people probably expect rock stars on the Warped Tour to be doing lines of blow off of hookers or something, but I did tons of fishing on the Warped Tour.  I caught a 17 inch rainbow trout on the fly rod in Washington State outside Seattle and cooked it up right in the parking lot.  That kinda freaked some of them out.  Some of them were fishing right along with me.

[Watch the Rev. joining Pennywise for a wild jam on the Warped Tour here ].

Richard:  So you’re truly a commissioned member of the Kentucky Colonels?  That’s just about the coolest thing we’ve heard.  How did that come about?   Follow up question:  are you really a licensed Reverend?

Rev:  It is the highest award the Governor of the commonwealth of Kentucky can give to a civilian. I am also a legal Reverend.  I collect titles like some folks collect stamps.  Seriously though, what an honor to be made a Kentucky Colonel.  I was never so proud as the day the package arrived in the mail from the Kentucky Governor.

Chip:  We seem to have interviewed a number of recent bands that contain married couples.  What’s it like having a spouse in the band?  Any marital spats on stage?

Rev:  It's easier having Breezy around than not.  I'd be lonely without her around.  I wouldn't want to do this by myself.  It's all too hard.  Fans would be pissed too!

Richard:  I always like a good murder ballad, and you’ve written a chilling one yourself with "Lick Creek Road."   Do you have a personal favorite murder ballad?

Rev:  Thanks man - that song is true.  All the songs I write are 100% true.  Oh man, murder ballads are awesome. "Rose Connely" is a good one. "Staggerlee" is awesome in so many of its different versions, my favorite being Furry Lewis's version of "Staggerlee."  "Frankie and Johnny" might be the greatest of all time though.


Rev: Let me start of by saying that my mom does make the best fried potatoes in the whole world. I love food so much I don't know if I have an ideal meal.  We are Peytons.  We eat pretty good when we are home!  On the road it is tougher to find a good meal.

Richard:   Tell our readers what to expect from your show at the Granada and what else is on the horizon for the Big Damn Band in 2012?

Rev:  We have a new record coming August 7th, and we'll be playing tons of brand new songs at the Granada along with tons of favorites.  It will be a great show.  We just need folks to spread the word so everyone knows we are coming!

Richard and Chip:  We'll do our best, Rev! 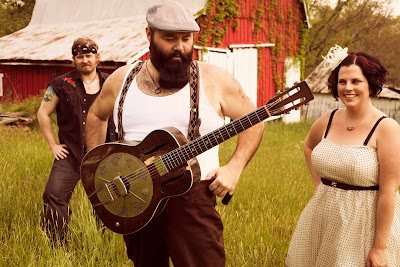