Weekend Recap: Mexican Fiesta, Film Church, and a Streaker at the Replay / Monday and Tuesday Picks


Readers, this was a classic LFK weekend.

In addition to the Flaming Lips hoopla (read our review over here), there was also the Mexican Fiesta.  We paid a visit on Saturday evening, ready to swill a few cervezas, but the closest thing to Mexican beer on offer was...Bud Light Lime.  Can't win 'em all.  Kudos to St. John's, however, for adding a mobile ATM on the church grounds to keep people eating and drinking as much as possible.  (Chip: "I briefly felt like someone should have driven the money lenders out of the temple, but instead I just bought some more tamales.").

Sunday morning brought the second installment of Liberty Hall's "Film Church."  If you live in LFK and truly love films and are not attending this event yet, you are making a huge mistake.  The 35mm print of Billy Wilder's The Apartment looked fantastic, as if you could step right inside those rich B&W interior shots and stroll through the cubicles alongside CC Baxter.   Reverend Maggie's pre-film "sermon" was spot on with its assessment of the film's script:  "It's impeccable. It cannot be pecked."   Next up:  the Coens' Blood Simple, July 22.  Yes, we briefly fainted when this announcement was made. 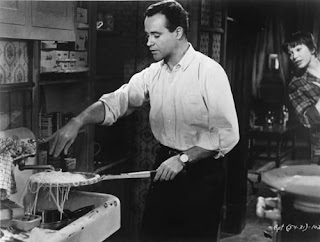 Despite the 100+ degree temps, we stopped by the Replay matinee on Sunday evening to catch a sweet set by California duo Driftwood Singers and a headlining set from Olassa.  Just after Olassa's second song, a wild-eyed fellow ambled onto the stage, commandeered Cain's microphone, began removing clothes, and said calmly: "We're gonna streak."  However, the intrepid Replay staff gave him the old "bum's rush" out the back door before his dingus appeared.  Streaking is only allowed on the kickball field around these parts!  Thanks also to Allison Olassa for treating us to a "doorkno" later.  Nothing tastes better on a hot LFK day than Hamm's on ice with a twist of lime!

Sadly, we failed to get a picture of the attempted streaking, but here's Driftwood Singers, baking in the Replay sunlight (man, that's gotta be the roughest stage in town at about 7:00 pm on a hot day).

But don't stop partying just because the weekend's over.  It's motherfucking Metal Mondays at the Bottleneck and there's an 80% chance that Bone Dance will stab and bury you at tonight's show.  (Re)Read our interview here ).  We've also received word that This Is My Condition will be rocking the scene, one-man-band style, along with sets from Electric Sleuth City and Collide.

And Tuesday brings the all-important City Commission meeting that's likely to (finally) level a verdict on the new Compton hotel at 9th and NH.  You better yell loudly tomorrow, readers!  We're still pondering City Commissioner Aron Cromwell's weekend statement about the project: "...if you have everyone unhappy, you probably are on the right track."  Sounds like this project is definitely on the right track, then.

And spend some time this week playing the first round of Larryville Artists' new Scenester Scavenger Hunt game.  Can you recognize all seven?  (sadly, we can't).  Check it out over here .