It seems like forever since the last Nerd Nite (even though it's only been a few days longer than normal), so we're certainly ready for Nerd Nite 7 on Thursday at Pachamama's.  This one is called "Drinking tea, data, and Dianes," and here is the line-up (which includes one of the Nerd Nite head honchos Travis Weller!!):

"Information Nation: Data in the U.S.A."
by Travis Weller

"Williams and Keaton: Two Dianes to Help Us through those Urgent Moments"
by Rebecca Evanhoe

Nerd Nite presentations on various beverages are quite popular (we've seen coffee and scotch in the past), so tea, with its long and well-documented history, was certainly inevitable.  Chip is currently working on a different kind of beverage presentation involving his favorite soda, Squirt.  His lecture will serve not only as a history of the soda--from its inception in Arizona in 1938 to its mascot-era (Li'l Squirt) to its new caffeinated concoctions such as Ruby Red Squirt--but also as a personal history of how Chip's life has been inextricably tied up with Squirt-related memories, such as his first Squirt (at age 14, on a Fort Scott hayride) to his college years, where he often mixed Squirt with Captain Morgan at parties for a drinking game called "Let's Squirt." 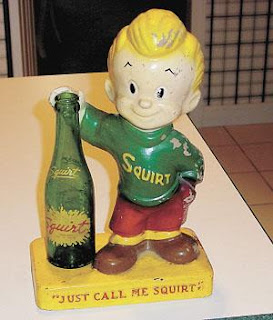 Travis promises his presentation on data will be extra "meta," so we're primed to take careful notes and also to bombard him with a series of questions related to James Gleick's recent non-fiction bestseller The Information, which we hope he's read prior to his presentation.

Finally, we're most excited about the last one, which we assume will contain a lot of Annie Hall material (although the Nerd Nite sites suggests much of the focus is on Keaton's lesser-known work, such as "her epically under-rated L’Oreal make-up commercials").    And we're secretly boning up on Diane Williams' fiction before Thursday because we're ashamed to be largely ignorant of her work!  However, we do wish a third Diane could be added to this list:  Diane Chambers from Cheers.

Visit the Nerd Nite Lawrence site here for full info on the presentations and the presenters.

We're loyal to our nerds, but we'll be sad to miss a chance to watch the Foxy by Proxy gals posing and performing for painters and sketchers and photographers (and random perverts) at the Arts Center on the same night.   Our friend Karen has full info for you over at Larryville Artists .

We love a good, weird one-man band (local favorites include This is My Condition and CS Luxem).  Wednesday (June 13) brings Colorado's Dear Rabbit to the Replay, and we think you'll be sold after reading this blurb from the FB page:

"Imagine attending a secret party thrown by Salvador Dali in an ornate smoke-filled drinking parlor in the dark belly of a creaky figate with Blackbeard, Captain Beefheart and a bunch of crazed, violent gypsies… Lots of old timey instruments (Accordion, Cornet, Trombone, Banjo etc.) played very energetically with a near-punk delivery with Rence’s belted lyrics over-the-top.. Quite a spectacle!"

Head over to the Dear Rabbit  Bandcamp and check out tunes like "thatrattlesnakeyouphotographed" and "oh, you pretty dear."

Japandroids have a new record, Celebration Rock, and everybody fucking loves it!  Especially Pitchfork, who won us over quickly with this reference to the 'Mats:

"The uptick in ragged and resonant guitar-based indie rock has dredged up a lot of deserved Replacements comparisons, but I don't think anything's captured their spirit to the extent of Celebration Rock."

Read the rave 8.8 review here , which contains lines such as this:

"Celebration Rock treats every day like the last day of school, raising a glass to the past, living in the moment and going into the future feeling fucking invincible. It offers itself up as a social lubricant, music meant for radios, keg parties, road trips..."

So let's get socially lubricated and celebrate! 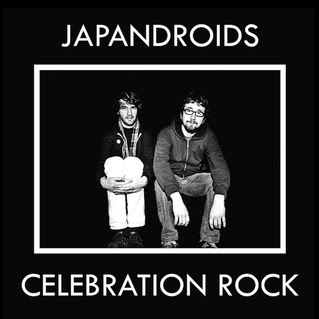