Do you like drinking beer while watching old movies about killer blobs from space?  We do.  Luckily, Retro Cocktail Hour's Cinema a Go Go is back at Liberty Hall tonight at 7:00 with a double-feature of The Green Slime (1968) and Caltiki, the Immortal Monster (1959).  If this is as half as fun as the lucha libre double-feature we saw with Cinema a Go Go, it should be pretty fun indeed. 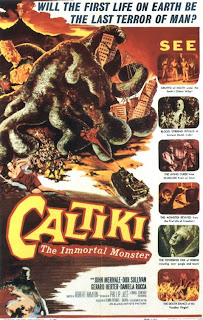 If you prefer spending an unusually crisp and clear autumn-like evening outdoors, EXTRAordinary is back at the Replay matinee.  If you're old, you probably know some of the folks in the band (formerly from Gourmet Mushroom X and many others).  Once again, they're joined by the fascinatingly strange Folkicide from KC (we caught a performance of theirs a few months back and are still puzzled by what we heard).

Here's the show poster, which offers the kind of imagery one might actually encounter at a Replay patio show if the venue contained a pool.

And make sure to end up at the Bottleneck late tonight for an evening of hot dancing (and a bit of political discourse) with Antioquia.  We interviewed them earlier this week.  Please (re)read the interview here.

Check out this amusing interweb description of their sound:   "There’s a cosmically lubricated whoosh to Antioquia, where spiky rock skitters atop thundering, Latin & African rhythms and a whacky inner gyroscope that spins through the Art Ensemble of Chicago, pre-Stop Making Sense Talking Heads, prime 70s jazz-fusion and a stoned Sproul Plaza drum circle in Berkeley."

If you didn't get your fill of art at LFK's Final Fridays last week, head to KC for First Fridays and make sure to check out Danny Joe Gibson's newest show, "What Would Froth Fourth," at 1819 Central Gallery.  Check out this wealth of press material  regarding Danny and the show, and please re-read our past interview with the man himself over here

This time around Danny sent us a list of titles for all the pieces in the show and invited us to speculate on what they might look like (and mean) so here are a few ideas.


"Skulls on a Sonic Tray"

Richard:  "I imagine this as a found-art piece in which Danny has assembled skulls out of Sonic onion rings and the "pink slime" of Sonic burgers to level a powerful critique against the devastation wrought by America's fast food culture."


Chip: "I hope guests are invited to nibble on the skulls."

"Man Under Tree with a Bird on His Knee"

Chip: "I suspect the title kind of says it all with this one, but I hope it's a really weird-looking bird or something."

Richard:  "Man, oh man, I'm hoping this is a collage of scenes from Pulp Fiction, or perhaps from all of the weird fetishized foot-imagery found in Quentin Tarantino films."

Free PBR for the first to guess which QT film this image comes from:

And if you have a deep and abiding interest in suburban malaise, like us, Johnson County Museum's new exhibit, "Bill Owens: Suburbia," opens today and runs through September 1.  Sample some of Owens' famous work here and visit the Museum site here .

This one reminds Chip of his own youth:

Nope on the Jackie Brown guesses.