One thing we love is pretentious music criticism, and we expect a bit of it from new books on music by the novelists Rick Moody and  Jonathan Lethem (both of whom we admire--sometimes--but neither of whom has made the cut over at PBR Book Club...yet).

Moody's book is called "On Celestial Music: And Other Adventures in Listening."  Here's a blurb from SFGate review:

"I'm not sure that I can follow his linkage between Nietzsche and the genealogy of drum machines, but I commend him for making the attempt."

We're going to bone up on our Nietzsche before tackling Moody's book so we can be smarter than this reviewer.

Lethem's book, Fear of Music, is part of the 33 1/3 series and explores, as you've no doubt guessed, the Talking Heads album of that name.  Here's Lethem's description of the Heads' "Memories Can't Wait" (via NPR):

"This dreadnaught of a song wears an exoskeleton of reverb and sonic crud as it grinds grimly uphill, armored like a Doctor Doom or Robocop who has been smeared with tar and then rolled like a cheese log in gravel. It is as if 'Memories Can't Wait' rides on spiked treads, a vehicle bogged in mud at the depths of the record's second side, and determined to climb into view over the crushed bodies of the other tracks."

Read up and we hope to have a long-winded discussion of Lethem and Moody with you in the near future at the Tap Room. 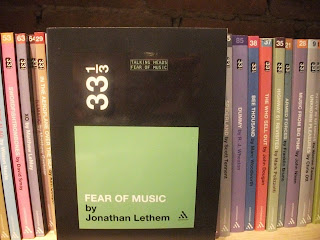 Readers, you already know about tonight's best bet:  Gospel Music/La Guerre/Spirit is the Spirit/CS Luxem at the Bottleneck.   Reread yesterday's post for some terrific blurbs about Gospel Music.

Today we're using this space for one of our occasional artistic forays as we take a number of sentences from recent local Craigslist "Missed Connections" and assemble them into a powerful poem that reveals the lust and longing in the hearts of the people you pass on the streets every day.  Who knows?  Perhaps one of those folks is composing an ode to your ass even as we speak.


You were always much prettier than I remembered.


You: On both of my flights yesterday. Long dark hair, big 'ole titties.
Me. Salivating


You were there with some guy dressed like Lenny from Of Mice and Men.
You were buying some candy...which I think made you more attractive.
Your dog has a tail like a flag, if that helps.


We could have awesome sex


I used to go over and I would fuck you hard.
You liked it when i fucked you hard.
If you see this...fuck yeah. Hit me up.


Reply with "futterwacken" as the subject.