With half of LFK's Americana-loving hippie crowd out of town for Wakarusa Fest, the crowd was on the lighter side for last night's hilarious triple-bill of KC Bear Fighters, Clyde and Clem's Whiskey Business, and White Ghost Shivers at the Granada.  For an intimate party, however, it was damned rowdy!

We arrived fashionably late and caught the last couple of songs from KC Bear Fighters, including the howl-along set-closer "Wolfman" ("If you want to see my wolfman power, come see me in the midnight hour. AWOOOO!").   Not always known for their stylish fashion sense (they're prone to Hawaiian shirts),  the Bear Fighters were nonetheless decked out in snazzy white suits to share such an important evening with some of Austin's finest.

Next up was Clyde and Clem's Whiskey Business, a large Austin ensemble who opened with a shout-happy tune about "fucking for the Lord" and barreled through a rowdy set of songs about whiskey (obviously), weed ("Purple Dank"), and women ("Donkey Punch.").  They're setting up a residency for a few days in Larryville with shows on the Replay patio this evening and tomorrow at Barnyard Beer for Mudstomp Mondays.  If you like sweaty, shirtless washboard players who run amuck throughout the venue dancing with audience members, you will like this band...a lot. 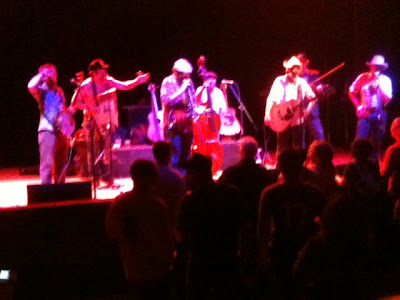 And then came White Ghost Shivers.  Man, that Shorty is tall!  Armed with a fake mustache, energetic dance moves, and a seemingly endless arsenal of between-song boner-banter (as promised in our recent interview), Shorty and Smokestack and the gang did their usual wacky, riveting, vaudevillian thing.  And, yes, knowing that so many of the boner references were made in our honor gave Chip an absolutely stellar boner.  A few set highlights were the anthemic "My Land" ("Black-eyed peas and collard greens is all we eat, our barbecue's not made with beef but PORK-ASS MEAT") and a raging cover of Old Crow Medicine Show's "Tell It To Me" ("Drink the corn liquor let the cocaine be.").   White Ghost Shivers is the second band we've heard cover that tune this week, probably because it's terrific.

Here's Shorty adjusting his 'stache while Smokestack belts a tune. 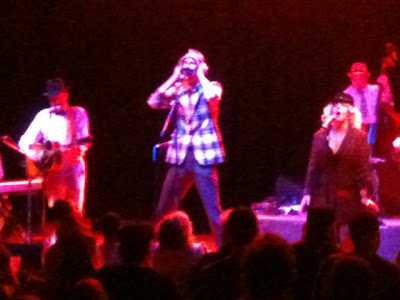