We're taking a break from our usual music interviews today for a chat with local artist John Sebelius about his art, his documentaries, and his clothing and board game designs (you remember his controverial "Don't Drop the Soap" board game, don't you?).   You may also know John as the son of our much-missed former governor Kathleen Sebelius and, yes, we certainly ask John about life under Brownback in the interview.

On Saturday June 23 at the Granada, check out John's new art exhibition "Still Under the Influence" along with screenings of his first documentary, "Searching at Sturgis" and his new short doc "71st Annual Sturgis Rally."  Doors are at 8:00, films are at 9:00, there's live music throughout the evening, and admission is FREE.

Visit John's official website here for all the info you need to his many projects.


Richard:  The sort of immersive investigative journalism you're doing with these Sturgis documentaries seems to be quite popular these days.  For instance, I just read an amazing collection of essays called Pulphead, from John Jeremiah Sullivan, which kicks off with his immersive investigation of Christian rock festivals.  So what led you to investigate the biking subculture and the Sturgis rallies?

John: I've always been attracted to unconventional, outsider communities. That fascination has helped guide much of my work. Initially, my attraction to the biking subculture stemmed from my lack of familiarity with that lifestyle. My ignorance became a great incentive to learn more. What has kept me fascinated after my initial introduction is the people - great stories bathed in Busch Light.

John:  Sturgis is an adult Spring Break. Instead of coeds on a beach, you have bikers in the Black Hills. Although there are definite pockets of weirdness depending on which camp you're at, the event as a whole is really safe. We camped at the rally both times in tents and that type of environment breeds sociable people. When you're sleeping in such close proximity to a stranger, it makes you want to make a new friend. Plus, everyone is comparing the size of their bike.

Richard:  I’m interested in your comments about “attraction and repulsion” in your work, how the surface might be appealing while the content might be off-putting.  Is this true of the painting and sculptures we’ll see in the “Still Under the Influence” exhibition?

John: I definitely think that work shown at "Still Under The Influence" explores the duality between attraction and repulsion. I'm intrigued by examining individuals and imagery that possess both qualities. Using a colorfully impactful palette and treatment of the surface helped me better explore these themes.

Richard:    This has to be said:  we are missing Kathleen Sebelius so much during the Brownback regime!  Two questions:  (1) what was it like growing up in a political environment and how did that affect your work?  And (2) do you find it hard being an artist in a state that’s recently sent the disturbing message that it doesn’t care very much about art.

John: I always enjoyed growing up in a political household. Although election years were stressful, I was a schmoozing machine by second grade.  Because my family valued the arts, I was allowed the opportunity and time needed to pursue my interests as an artist. The unconditional support I received from my family allowed me to take risks. Sometimes they weren't the smartest choices, but every bad decision has helped me grow as a person and artist.

We need unconventional thinkers, entrepreneurs, and artists more now then ever. Fostering an environment that celebrates and promotes individuals that think outside of the box is essential. I definitely wish we had proper funding for working artists and far greater support for art and music programs in the public schools. I know I greatly benefited from both of these programs. Because I live in Lawrence I don't feel deprived of art and get to experience new work daily. I am much more concerned about small towns in Kansas that do not have these opportunities. They need these programs and funding in the classrooms desperately. But with or without funding, Kansas artists will continue to make art.

Chip: Awhile back you got a bit of criticism for designing a “prison-themed board game” called “Don’t Drop the Soap.”  I certainly have friends and family from Fort Scott who’d tell you that prison rape is no laughing matter!  Tell us about the origin of the game and the controversy.  Also, do you ever have friends over for “game night” and play a rousing round of “Don’t Drop the Soap?”

John: The game was created as an illustration project during my senior year at RISD. In hopes of delaying a lifetime behind a desk, I took out a loan from a bank, pitched the game to a manufacturer, and had it produced. I learned a lot about business, myself, and that I don't have a career in board games. Ultimately, it led to me going back to school and getting my Master's from KU, so something good has come from it. Let's just say that it's been awhile since I've rolled the dice.

Chip: In addition to art, documentaries, and games, you also design clothing, right?  Tell us about that?  And how much might it cost for you to make me an artistic shirt featuring all the things I enjoy, such as PBR and pretty women.

John: Glad to know we share the same interests. I noticed that when I would look for men's dress clothes they were all the same. To break out of that rut, I began drawing on dress shirts and jackets that I got from secondhand shops. I always loved taking clothes that people didn't want, drawing on them, and selling them back to the very people who had discarded the shirt in the first place. It's the circle of life for dress shirts, but without Jonathan Taylor Thomas voice-overs. Reuse, recycle, redesign. My clothes received attention when I won the Deegie's Carma Fashion Designer Open Call Contest in 2007. After that they were carried by Hall's, Tomboy, and Hobb's. For a dress shirt it's $95 and a t-shirt is $50. A little pricey but no two shirts are ever the same. Plus, you're getting an original piece of art and a functional shirt.

Richard:  So what else is on the horizon this year in terms of your work?  And are you planning to make more documentaries in the future, perhaps investigating other communities?  If so, which ones do you think might be particularly revealing?

John:  The first film I made, "Searching At Sturgis,"  is more of an artist narrative about myself as an outsider amongst this community. The film I am now pursuing explores the residents of Slab City and is filmed in a more traditional documentary style. Along with documenting the individuals I lived amongst, I am planning on creating a traveling work of art using a 76' Dodge RV as my canvas. Because this is a traveling community that lives mainly in RVs, it made sense to showcase the art across a portable home. Not only will the painted RV house me during my stay at the Slabs but also, because it is movable, I will be able to discuss this community with a much larger and diverse audience. In the end, this work is an investigation into what brings people together to this deserted oasis and the importance of keeping this site open.


Here's a piece called "Gaze" from John's "Still Under the Influence" opening.  Gaze upon it on June 23.  See you there. 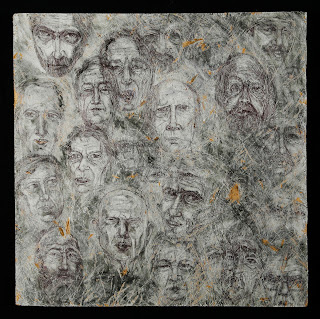