Today's big scenester news:  the Granada just announced that GBV is stopping by in September.  No big deal.

Now, on with other stories.

We stopped by the "Steampunk Hillbilly" edition of Super Nerd Night last night at the Bottleneck.  Here are the drink specials, though not even the bartenders or Astro Kitty's Joel could explain to us what "fogcutter" was a reference to? (it certainly sounds steampunk-y though!).

We had a nice chat with the AboutSF crew (one of whom had even read Matt Bell's Cataclysm Baby, this month's PBR Book Club selection), and we saw a terrific set from A.J. Gaither of the Fall Down Drunks, which assured us that seeing a full-band set by the Drunks needs to be one of our top priorities.  AJ's stompin' songs about whiskey even impressed the steampunk cosplay girls:  oh, how they danced!  Chip had a boner and could not operate the camera properly, but here's AJ: 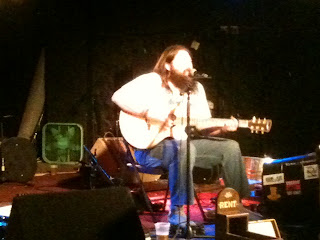 Sadly, we didn't get to stay for Monzie Leo and Big Sky since the sets were running at least an hour later than advertised (finish your Magic tournaments up in a more timely fashion, nerds!).

Anyway, our verdict is:  four out of four Fogcutter Shots (whatever the fuck they are).

Other scenester picks for tonight and the weekend:

If you're a nerd, go to the Lawrence Public Library tonight for a live video chat with Neal Stephenson and other SF writers about their multi-authored on-line Mongoliad series.  It's not as good as our Harry Lupus horny-boy-werewolf series, but it's pretty cool.  Read Mongoliad here and get the info on the library event here

Tomorrow night is the opening of the "Body of Work" exhibit at the Arts Center, curated by our friend Karen, who runs the Larryville Artists blog , which you should be following for the local arts scoop.  We're hoping for some "tasteful nudes" at this show (Chip: "Distasteful nudes are also acceptable.")

And local heroes Cowboy Indian Bear, fresh off a major tour, will make a triumphant return to LFK on the Replay patio this Saturday evening from 6:00-9:00.  Also on the bill:  Ghosty!  Go somewhere early for once, scenesters, and see this show!

One of our favorite things on the LJ-World talkbacks recently is flyin_squirrel 's recaps of the many fuck-ups made by the City Fathers.  Here's a new one:

In the last week:
- Student suspended from school for shaving his brothers head in his own home with the parents permission.
- City takes a businesses license because they cater to minorities, yet have less police calls than the Oread, Abe n Jakes, Hawk, Ranch and Tonic.
- City shuts down chick sales because the chicks have to share a cage
- City makes deals behind private doors to open a rec center
- City working with KU to control what students do on their free time, and when off campus
- City creates new Economic Development group, to help speed up the incentive process
- City installing more traffic cameras to supposedly "Help with traffic flow". (how much you want to bet you will soon be getting tickets in the mail from these cameras...)