Larryville has no shortage of see-and-be-seen shows (for scenesters), but occasionally you just want to cut loose and do some dancing!  We recommend Antioquia's June 1 show at the Bottleneck.  They're rolling in from the Bay Area for all your dancing needs this week (bonus:  their lyrics often consist of trenchant political discourse!).

We chatted with Paul and the Antioquia family about dancing, media fear-mongering, and the importance of Kurt Vonnegut and the Beastie Boys.   Also on the bill:  KC's Making Movies and LFK's Tangent Arc (reread our Tangent Arc interview here ).

Stream Antioquia's new album Viejaro (and all the others) on Bandcamp and visit their official website here .

Enjoy the interview and see you on the dance floor Friday night!


Chip:  We know that the band’s name refers to a part of Colombia (because we looked it up on Wikipedia!). But can you tell us more about why you chose the name and perhaps give us some advice on how to remember and pronounce it?

We chose to be called Antioquia because that's where Craig and Adley were when they decided that they would found a band.  The region was a life changing inspiration and, once you can pronounce it, a pretty cool word.  Here's how to pronounce it - [an-tee-OH-kee-ah].  Or, you can think of it in three parts, Anti, O, quia.

Richard:  Your press material lists some amusing ways that listeners have described your sound:  Dreamspeaker Village Folk Rockadelia, Progressive Human Beatitudes, Evolutionary Love Funk, Post Dunk Tank, Paraprimordial Jazz.  Can you offer up an amusing one of your own?

Richard:  We’re pretty excited about your show because it sounds like we’re going to encounter some unfamiliar genres (soukous, cumbia) and all manner of instruments (gaita flute, chekere).  Tell us a little about the Antioquia-sound and what we can expect at the Bottleneck show.

Our sound is as eclectic as our tastes.  We're like a musical all you can eat buffet.

Chip:  You list one of your band’s interests as Kurt Vonnegut?  What role does Vonnegut play in the band’s mentality and is it necessary for us to reread Slaughterhouse Five and Cat’s Cradle in order to “get” what you’re doing?

It's necessary to reread Vonnegut in order to "get" what the world is doing.

Richard:  We love the title of your album “My Piano Ate the Front Page of the San Francisco Chronicle” and the artwork is cool too.  What’s the origin of the odd title and artwork?

While on a journey through the depths of our minds one night our piano joined us in frustration at mass media's habitual fear-mongering and false information espousing.  The piano offered an answer.

Chip:  There’s obviously a strong political element to some of your songs, such as “Police Brutality” and “Humans Do,” with its opening refrain of “Fighting, fighting, fighting, that’s all you humans do.”  Is it okay if we just grind on a bunch of sexy chicks at your show, or do we also need to stop and reflect on the lyrics?

Due to our oversaturation of entertainment influences, one must alternate between grinding those of the opposite sex and reflection on philosophies of opposite sects.  Simultaneous grinding and reflecting not recommended.

Chip:  We were just listening to one of your songs called “No Sleep Till Oakland.” Is that a Beastie Boys reference and are you major fans of their work?

Yes, yes.  RIP Adam Yauch.  It has been said that Oakland is the Brooklyn of the West Coast.

Richard:  What else is on the horizon for the band in 2012 as far as new music, touring, and other projects?

Antioquia will be touring for most of the year and aims to release another music video this winter.  Check out our video for the tune Idaho here

Here's the band and the new album cover: 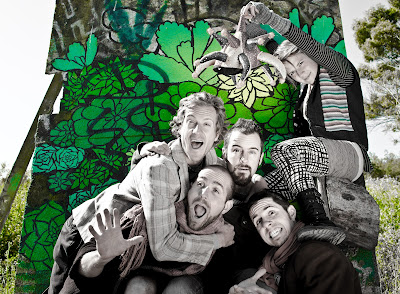