Final Friday is almost upon us, so let's see what the scene has in store for us this month.

Chip has always been fascinated by nude modeling (what happens if one gets a boner?), so he's curious to see what kind of tasteful (or tasteless) nudes may be on display at the Body of Work exhibition at the Arts Center.  The street outside the Arts Center also promises to be intriguing with a pre-party for Saturday's Art Tougeau parade featuring The Ukesters (a 15 piece ukulele band) and local legend Arthur Dodge.

The Pig's opening is called "Turning Back the C(l)ock."  We're certainly curious what that clock/cock thing is all about.  The press material says:

"What year is it? Judging from the work of the Kansas Legislature, in regards to the rights of women, it could be 1960. This body of work was motivated (in part) by the ridiculous and absurd but deathly serious attempts of our elected officials to turn back the clock."

We're hoping for some hilarious Brownback portraits at this opening (remember that great one from our buddy Leo where the baby gov is sucking at the breast of Sarah Palin? we'll post it below just in case you've forgotten its power!).

And our friend Karen over at Larryville Artists highly recommends the "aluminum mesh sculptures" at Invisible Hand's "I Don't Feel Like It" opening. They look delightfully creepy!

See you at the galleries. 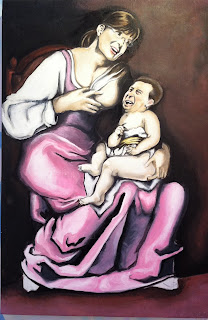 For those of you wanting to kick off your weekend early, head to the Replay tonight and catch Schwervon!

They're a two piece NY duo who just moved to KC, and they've recently been recording in Memphis with the producer Doug Easley, who's worked with Pavement, Sonic Youth, and Cat Power.  Go to Bandcamp and listen to "Cougar Pride" right now.  This shit is irresistible.  As if we weren't already sold by that tune and the exclamation point in their title, they also have a song called "What We Talk About When We Don't Talk About Love."  That's a Raymond Carver reference, folks!  Still not convinced:  LFK's The Ants are opening and they always kick ass.