We only saw two acts at the Replay's Spring Into Summer fest, but that won't stop us from making sweeping generalizations about the fest itself.  Here's our two cents on the experience.

Fourth of July played a nice set of old and new material on the outdoor stage at 7:30.  Most of Fourth of July's fans, of course, are incapable of being out and about as early as 7:30, so the area was 3/4 empty (or 1/4 full, if you're an optimistic scenester).  Freeloading tourists lined the area just outside the "festival grounds," receiving a jokey mention from Brendan:  "I don't think those people have paid yet."   But they really should have paid.  It's only 5 bucks.  Come in and drink a fucking beer.

Hearts of Darkness had the prime evening slot as the sun went down.  They lined up in a wall of funk across the stage and unleashed a high-energy hour of horns and dancing and rapping as the outdoor area finally filled up.  But HoD asks more than many of LFK"s scenesters are willing to deliver, namely: clapping and engagement.  Admittedly, however, they finally got a good little dance party going in front of the stage, but we looked around during the song "Unplug Yourself" and saw...a lot of folks texting and tweeting.  Oh, such a beautifully ironic moment.

It's a shame that the Jackpot is no longer involved in this event.  We like our festivals to have multiple stages and overlapping bands where one has options for which bands to watch. Plus, it's fun to duck back and forth across the street for a change of scene.

While the outdoor line-up was nicely varied (rock, hip-hop, funk, girl-group harmonies), the late-night inside line-up was pretty much the same stuff one can see any given weekend at the Replay, making the event feel less like an "event."

Scary Manilow's new "Cat Fishing" T-shirt with ALF on it was pretty fucking awesome, and he was justifiably proud of it.

Photos:  Fourth of July and Hearts of Darkness.

You can view more--and better--photos here from I Heart Local Music. 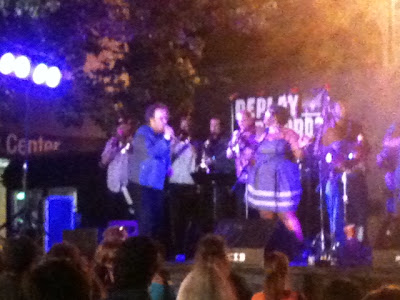 But how will you spend a sunny Sunday evening, scenesters.

It's hard to tell what's happening at the Jackpot, but we think Daymoths have added a show there (prior to their gig in KC tomorrow at the Record Bar).  At any rate, we interviewed them this week.  Read it here if you haven't already done so and make sure to buy some of their handmade soap at the shows!

And why not go see our friends from Olassa play at the Replay matinee?   They're joined by The New Imperialism and by the Haunted Windchimes, who look like this: