KVKL kickball season kicks off tomorrow, readers, and we asked our Twitter followers to submit their favorite kickball memories this week, which have now been compiled into this powerful, multimedia tone poem.  Participation was sparse, which suggests the following:  (a) no one gives a fuck about kickball anymore, (b) people are tired of these Twitter-poems, (c) scenesters are simply too lazy to compile a tweet and send it to us.  Most likely it's some combination of all three.  Anyway, here's the poem, and special thanks to Late Fees and @eringobooze for a whole bunch of participation to make up for other lackluster scenesters.

We'd encourage you to read it once straight through then go back and click the links for a few pics (and a video!).


10th inning walk-off home run to win the 2010 Less Awesome Championship plate.
Three straight KVKL games in 1 day.
Sweet Jesus.
'09 upset where No. 23 Liberty Hall took down No. 1 Eldridge
in triple digit temps
at the shade-less Broken Arrow field.
Game of the week:
Fourth of July weekend last season.
Made that magic happen.
#kickballerforlife
Streakers during the fireworks on the Fourth of July.
nothing says freedom like PBR and nudity!
One time we saw BARRR's penis.
The summer I became the Bionic Woman!!! #astrokittyspacepussy4ever
My best KVKL memory:  girl on girl 2x play
under the lights
getting Shaher from the Goats out for a Sacred Sword victory 2010
& the goat stew
I only have photo memories.
I met Miss Jen Beck and most of the cool people in town last summer
Slide into third, second degree burn.
Best KVKL-playing memory: kicking the winning run in at Hobbs against a hostile team
Best KVKL-watching  memory:  [on-field proposal !]
GAME OF THE CENTURY:
7th inning proposal inspires Late Fees to rally from 4 run deficit,
bride-to-be kicks in winning run.
Sorry, I always play kickball in the Parks and Rec leagues,
One word: Overalls. And... Kickball is OVER! #DEAD
I'm ready for Mushball .


And below is the Hobbs backstop, newly painted and ready for the first GOTW.  Enjoy!

As for us, we'll be across the river on the North Side at Frank's, plotting LFK's first mushball league.

We don't like leaving LFK, but occasionally we find ourselves in need of a summer outdoor concert spectacle, so we found ourselves at the Crossroads in KC last night to await the touchdown of the mothership and the emergence of Dr. Funkenstein his own self!  It was our first time seeing George Clinton and P-Funk, and we learned many important things, such as:

--Having a half-nekkid woman on rollerskates buzzing about the stage can improve any performance.

--Ditto for having a dude named Sir Nose who walks around on his hands a lot and performs other various acrobatics.

--KC's The Good Foot is a terrific soul party with a super-cool lead singer.  We want to party with her and hope to catch them again this summer!  (3rd photo below)

--Hearing a big crowd chant along with ridiculous innuendoes is a near-religious experience:  "Yank my doodle it's a dandy."

--PBR costs $6 at the Crossroads.  Avert your eyes, LFK scenesters:  here's the shocking proof.  It's more expensive than whiskey and the same price as every other beer! 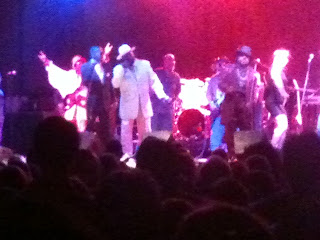 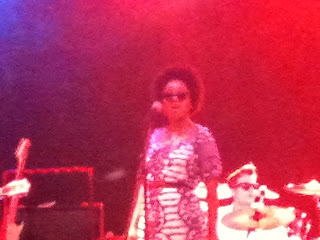