If you're like the boys, you love wearing T-shirts that showcase your favorite bars. But perhaps your Replay shirt is so covered in PBR stains that you barely wear it out anymore (except to the Replay). And perhaps that last sorostitute you banged wore your Quinton's T-shirt home. Maybe you're in need of a new shirt from the Bourgeois Pig: 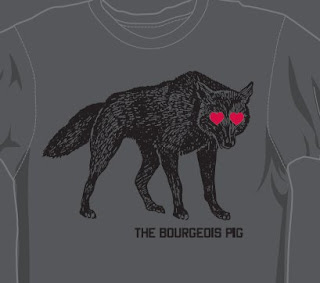 Chip: "Why not a pig with hearts for eyes?"

Richard: "Why not something even more hilarious, such as a 'breastfeeding prohibited' sign?"

Our non-townie readers: "Is that an inside joke?"

We're convinced that Sufjan Stevens is NEVER going to make one album about each state, as he's been promising us for years, but at least he's finally given us something new, an (hour-long?!) EP which appeared on-line yesterday to the delight of hipsters who really should have moved on to some kind of new quirky shit by now. It's called "All Delighted People" and according to the press material it's “built around two different versions of Sufjan’s long-form epic ballad ‘All Delighted People,’ a dramatic homage to the Apocalypse, existential ennui, and Paul Simon’s ‘Sounds of Silence."

If you've got an hour to fill with epic quirkiness today, stream it at the address below for free or give poor Sufjan $5 bucks and download it and hopefully he'll eventually get around to recording an album about Kansas containing an 18-minute song called "Larryville" and featuring a video he'll no doubt shoot on location at the Replay in which we all do cute dances while dressed as cheerleaders or something. 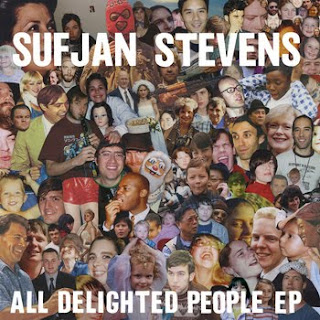 for whatever reason...I hit up mediafire for the Sufjan download....no idea if I'll listen to it or not. Also...saw that shirt this morning with my grrls. I thought the same thing....the wolf?

Yeah, is the Pig-wolf a reference that we're not getting? Those folks at the Pig are very smart. Also, they hate breastfeeding.

Behind the times said...

I'm just really starting to groove on COME ON, FEEL THE ILLINOISE. Hopefully I will live long enough to appreciate ALL THE DELIGHTED PEOPLE.

Clearly this is a reference to Duran Duran's "Hungry Like a Wolf"; a sad riff on "Looking For Love (in all the wrong places).